This character review does contain spoilers. Natsu Dragneel is the main male protagonist in Fairy Tail. He is carefree and slightly absent-minded. Completely loyal to his comrades and guild he will take on anyone or anything that threatens them.
. 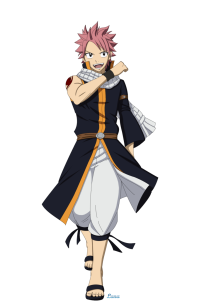 Raised and taught to be a Dragon Slayer by his adoptive father, Igneel, who is an actual dragon. Despite living in a magical world dragons are still extremely rare and believed to be extinct.

At times Natsu can be dimwitted but he is willing to go down protecting his friends. In the guild, Natsu often accepts jobs that will improve or prove his strength. He has a tendency to go overboard since he does not hold back. This leads to hilarious results. His desire and drive to improve often lead to him challenging the stronger ‘S-Class’ wizards in his guild. He has yet to defeat a single S-Class wizard in Fairy-Tail.

After defeating his enemies he holds no ill will towards them. Instead, he is quick to offer his hand and help them. Natsu’s love of fighting has led to him developing a strategic mind, which on various occasions helps him to find weaknesses in his opponent’s techniques, or simply weaknesses his opponents themselves possess. Natsu has also defeated his opponents with pure wit, rather than brute strength.

When Natsu fights his emotional state influences his magic’s intensity and strength. His friends will motivate him according to the situation, whether that is teasing him to get him riled up or encouraging him to keep going. Unlike other fire mages, Natsu has the ability to eat flames allowing him to get stronger and get an energy boost. This ability comes from being a dragon slayer.

In later episodes, Natsu learns transformation magic where he turns into Lucy. It is not clear how far he has developed this skill.

Natsu is voiced by Tetsuya Kakihara in the original (Japanese and Subbed) version and by Todd Haberkorn in the English dubbed version.

Throughout the series, Natsu gets stronger and you start to learn more about his past. Turns out even though his age is not specified he is over 400 years old. For this to make sense you need to either read the manga or watch the anime!