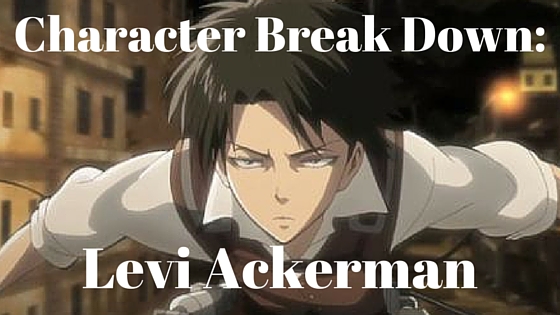 This breakdown has a lot of spoilers.

Levi is either frowning or expressionless. Add that to his calm demeanuor and it make it almost impossible to guess what he is thinking. From extensive 3DMG usage his physique is well-developed in musculature.

Levi is considered and called ‘clean freak’ by those who know him well. He likes to be spotlessly clean and his environment must be as well.He has been known to wipe down his blood-smeared blades while still on the battlefield.

He is very abrasive and not all that likable, often leaving a cold impression on people. His manner of speaking is blunt and often insulting. He is not one to take orders however he will willingly follow orders from Commander Erwin Smith whom he has great respect for. Levi believes in his vision for the future of the corps. As well as trusting Erwin Levi also places great trust in his subordinates.

Levi’s obedience is strictly limited to individuals he respects, and he has no problem showing open disdain for authority from anyone outside of this circle.

He does have a sense of morality and empathy but rarely shows it. He places great emphasis on the value of human life and finds it disturbing when it is suggested Titans were once human. He tells his subordinates to use their judgement so that they can avoid blunders that might cost them their lives. He hates unnecessary casualties.

Although he bore no malice toward Eren, he was willing to resort to violence against him in order to save his life at his tribunal. Afterwards, he made a point of asking Eren whether he resented him for the beating. While Levi is clearly loyal and shows empathy for his comrades he has no mercy for the titans. He slaughters them indiscriminately and when he is with people he views as enemies he is capable of being sadistic and vindictive.

While Levi’s skills are in a different league way above the others he isn’t obnoxious about it because he knows that in battle anything can happen. However he will speak up when he knows he is the only one who can do a certain task. He learnt a lot of various skills from his uncle after his mother had died. Before entering the survey corps Levi lived the life of a criminal. When he first joins the Survey Corps, he wielded the swords in a way his squad leader called “wrong.” However, this method has greatly helped in his ability to slay titans. This method involves holding his right sword backhand. However his way enabled him to utilize spinning and other rotating attacks, allowing him to maintain incredible speed and agility while fighting.

Edward is voiced by Hiroshi Kamiya in the Japanese (subbed) version and by Matthew Mercer in the English dub.