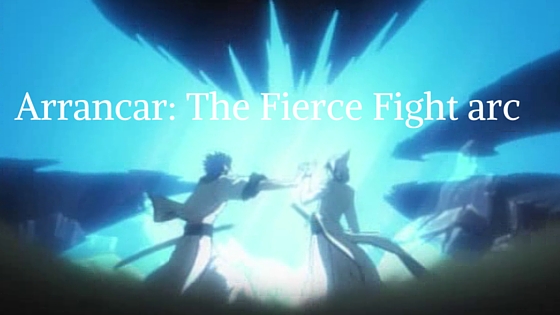 Ichigo and his friends have split up upon entering Las Noches, each picking one of the doors available. Almost immediately each of them are faced with an opponent that they have to use all of their strength to fight otherwise they will be unable to progress.

Ichigo, Uryu and Chad are all challenged by a three digit numbered arrancar almost immediately. However Rukia comes face to face with her past and Renji is forced to deal with trials of his own. Once again each person’s fight is close with help coming from unexpected places. The strength of the three numbered arrancar is unexpected and worrying for each of the characters. Their match up’s almost seems on purpose. While dealing with a troublesome comrade Renji is forced to face an Espada and Rukia is forced to relive her traumatic past.

As the arc progresses you really get to see how much each of the characters has benefited from all of the training in the previous arc. There is quite a bit of comic relief thrown in to help alleviate some of the tension from the various battles that are going on around Las Noches.

There are flash backs and memory episodes as characters find or remember their reasons for fighting and gather their resolve.

The fight scenes are good and some of them are really thought out. This season was pretty much a battle royal. A couple of the fight endings are really unexpected but still enjoyable.

That is a massive 8 fights in this short 16 episode arc! Each episode has fighting in it as well as having the actual story progress. There are multiple layers within this arc

The episodes use three pieces of music. There is one opening song and two closing songs. The single opening song is “After Dark” by Asian Kung-Fu Generation. The first of the closing songs is Kousuke Atari’s “Tane o MakuHibi” (“Seed-Scattering Days”), which switches in episode 154 to “Kansha.” ( “Gratitude.”) by RSP.