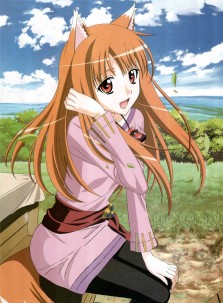 Holo is the Wise Wolf. She is a deity that can change her appearance from a young girl with long hair and ears and a tail with a splash of white at the end to a terrifyingly massive wolf. Her hair is an orangey brown in human form and her ears resemble those of foxes with white tips. Because of her ears and tail that are easily recognizable she is often forced to wear baggy clothes so that she can hide them. In both forms her eyes remain red.  While she is in her wolf form she is still able to talk normally and she is capable of reaching unimaginable speeds and covering vast distances.

The only way she can change into her wolf form is by consuming either wheat or human blood.

Smart and confident, Holo is as her title implies. However her confidence is usually only shown around Lawrence.  She is flirtatious and manipulative towards him, while often mocking his (supposed) thinking and negotiation skills.She dislikes being left alone and feeling lonely. She is loyal towards Lawrence, she is willing to put her life at risk in order of saving his. She is usually good-humored and talkative especially while traveling.

Holo enjoys drinking alcohol, often drinking when having the chance to do so and getting drunk. She also tends to eat a lot of food, ordering large quantities. When it comes to Lawrence she has shown a jealous side when she sees other girls talking to him. Holo is a very proud “wolf” but does understand that she does not know everything.

Holo is voiced by Ami Koshimizu in the Japanese (subbed) version and by Brina Palencia in the English dub.