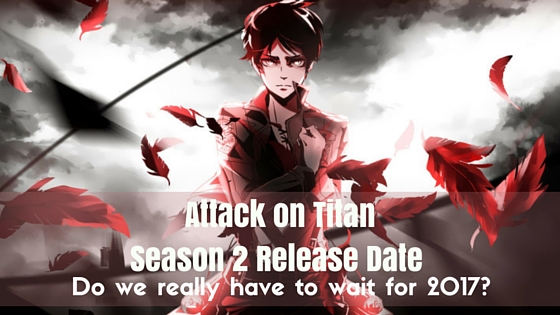 Rumors have spread across the internet about the release date of Attack on Titan being pushed back until 2017. However no official release date has been given. The release dates have been speculated on since 2015. It was rumored that season two will air in October this year. However now the new rumor is that it will only be aired next year in January 2016.

According to My Anime List Attack on Titan season 2 will happen in 2017, although no month has been set. On other sites that give release dates Attack on Titan is still listed under TBA (to be announced).

For now all we can do is wait for the official announcement for when season 2 will be released.

At least we know that they are working on it. I would rather wait for them to complete the anime properly instead of rush it and have a messy and half done season. So I am happier they chose to delay the next season rather than rush to complete it.

What are your thoughts on the rumored release date, 2017?

In the meantime here is the trailer to the second season of Attack on Titan:

5 thoughts on “Has Attack on Titan Season 2 release date really been pushed back?”