I have seen a few anime crush posts and thought I would give it a try. So to kick start it off I am dedicating the first Man Crush Monday to Viktor! I absolutely adore Viktor and his flamboyant and flirtatious personality.

Plus I cannot but help the fan girl in me squeal when he comes onto the screen. And I was pleasantly surprised at the amount of fan service offered. I am use to there being more fan service for the guys so seeing plenty for the girls was a great bonus. When the first of the bath scenes came up I laughed out loud and my mom came over to see what was funny. She then smiled slightly and commented that the leaf had been rather well placed.

His skating is honestly beautiful and I really do enjoy watching him skate for the few times we do see him skate. His happy go lucky side tends to overshadow the fact that he does take things seriously and that he does really think ahead. Even though he is genially an air head and forgetful he is calm and tends to be level headed.

I really enjoyed his approach as a choreographer for both of the Yuri’s making them explore sides to them that they were unaware of themselves. He really paid attention to both of them and pushed them to dig deep.

It also impressed me how far Viktor was willing to go for Yuri, from offering to be whatever Yuri needs. While training Yuri he spends most of his time with him. Even though he is new at coaching and unsure how to handle Yuri’s performance anxiety he does his best to cheer him up and cheer him on.  I also love how devoted he was to his dog. Which I completely understand and support. Plus I am a sucker for trench coats, white hair and blue eyes! 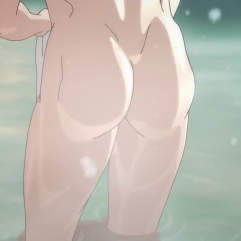