What, wait huh? How can they just end the season like that? Well I get to that soon enough. I am not a big sports fan in any way shape or form, but my curiosity got the better of me when a couple people mentioned they were watching this and I read a review of the first few episodes on the blog Archi-Anime.

Onada Sakamichi dreams of joining the Anime Club and discussing his favourite anime with his fellow otaku. Finally Onada has the chance to speak about anime with friends and have a wonderful high school life full of fun. Or so he thinks. He soon learns that the club has shut down and so he takes it upon himself to find fellow members. While trying to find new members he is challenged to a bicycle race by fellow first year Imaizumi who had seen him climbing a really difficult hill on a ‘mommy bike’. Seeing his chance, Onada accepts using this as a chance to get a new member for the Anime Club. Will Onada get the anime club going again or will he realize a new love?

There might be a few soft spoilers but no massive ‘what is the point of watching it now’ spoilers, so it is safe to read. I had a rather high hope for this anime after reading HEYITSZEL‘s first impressions and the first few episodes let me down. I often sat thinking okay, so when is something going to actually happen? Yes I enjoyed and related to quite a bit of Onada’s otaku side and I really loved that he looked around before singing his favourite anime opening track. Which I can completely relate to. I also really understood how he felt about athletic clubs. It still had a slow start for me though.

Then there is Shunsuke Imaizumi, I knew I would like him, but I just did not like him right away. Focused on basically nothing other than cycling, he was arrogant and he was obsessed with winning. Oh wait never mind, I liked him from the start. Don’t judge…

Any way carrying on, I am not an overly patient person and ‘fights’ that carry on for an extended period I eventually tend to lose interest. Some of the races in this are like that but even though they are drawn out it somehow managed to pull me back in. I thought things would go at a quicker pace so I was surprised that it took meeting another cycling nut job, Shoukichi Naruko, to give Onada that final push to join the Bicycle club.

Those three are basically the main trio of the first years that join. On the day that Onada and Naruko join the club they are then promptly forced to take part in another race. Yea by now you can kind of follow what will happen repeatedly. In some anime it is fight after fight, or match after match, so this one is obviously race after race. I do not mind this type of pattern as long as there is a uniqueness that differentiates the previous rep from the current one. That is something that this anime does offer, it is great in the way that even though it repeats themes you are still left wanting to know how it will play out.

Once I actually got into the story I was happy that even though Onada was talented, he was not ‘everything’. He was good at climbing, that was it. I also revelled in the fact he was not the best at climbing. They still managed to keep a trace of reality in that he is a complete armature who has only started to cycle competitively. So yes his fitness level was not really where it should or could have been. Even though he wasn’t really fit, it was impressive that he could ride 90km in one day, once a week before he joined the bicycle club. I really liked the third years and really enjoyed watching how they guided their younger members as well as how they interatcted with one another. You could tell that they trusted and relied on one another. My favourite of the third years is Yuusuke Makishima, even though at first I was put off by him. Then as the series rolled on (like episode 5) I was happy. Plus I really liked his hair from the beginning but there is no doubt he is a weird character.

The artwork is slightly older but enjoyable. It would go from being rather simple at points to really detailed. I loved the way that the eyes would come to life in scenes and how you could easily see what the characters were feeling.

I enjoyed the intro song but skipped over it quite a bit. I grew to love (and possibly sing along) with Love Hime’s opening track (the Princess song Onada always sings).

The closing song I listened to possibly three times, usually just skipping to the end to see the short skits.

Then for those of you like me who always check after the credits for extra bits, I really enjoyed them. They were nonsensical and basically pointless with no added value to the story but I love watching the slow but sure conversion of Imaizumi as he is slowly being drawn into the anime world! Plus how adorable when he blushes? 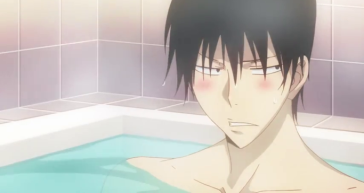 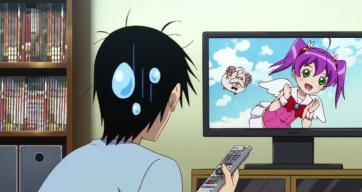 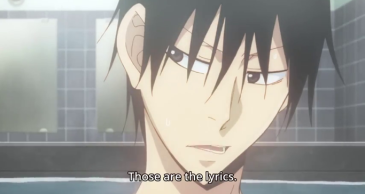 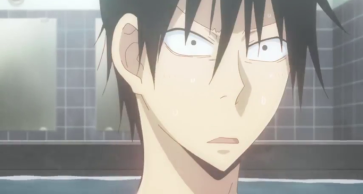 Now comes in my serious grumbling, I had finally got my hands on the last few episodes doing the thing I do with books, looking at the amount left going ‘there is no possible way that everything will be concluded’. Which sucks because I was friggen right! Episode 38 I am hooked watching and urging on a select two riders and hoping a horrid ‘accident’ for a third. Then nothing, the end credits start playing and they end off with red letters reading ‘See You Next Ride’. Like what the hell? Neck in neck to racing to the end of day 2 of the inter-high with the finish line basically in reach and it ends. Just like that.

Did you know that Yowamushi Pedal can also be translated to lit. “Weakling Pedal,” or as as “Cowardly Cyclists”? I found that to be quite amusing.  I would recommend this as an anime to watch, even if you don’t follow cycling or know anything about it, it is quite easy to watch and understand. The charaters are interesting and hold their own. They merge together quite well and the humor is amusing and not ‘trying too hard’. The ‘fan service’ is next to nothing so it does not distract from the actual story. So on the whole, I am diving straight into the next season to find out, how does day 2 end? So glad it is already out and I do not have to wait. However I am worried about when I catch yup an d am forced to wait for the episodes to come out.

6 thoughts on “Yowamushi Pedal, but I don’t even like bicycles!”