I watch anime, read manga and game so a dating sim seemed like an obvious move forward, or was it? For me, myself and I it was probably not. I had read and heard great things and there were some really great reviews and don’t get me wrong, I am not knocking or dissing it but it just did not work out for me.

There were so many aspects to it that I was looking forward to. You could mostly choose which path you would take and each combination would have varying results. Then there is the fact that there is a lot of reading and as an avid reader that did not bother me in the least.

I have been playing these for over a month now, going in daily. I have only missed a few days but I still did not anticipate how long these games would take for me to play. So what did I play?

Office Lover
Taking place in the office, yield to temptation with three playboy bosses. One is a genius designer with a hot and cold personality. Another is a sales strategy manager who happens to be a prince. The third is a famous outside consultant who happens to also be a narcissist.

I went with Kitazawa, I figured I would start with the first and work my way through the list not realising how long it would take me to actually play my way through one.It took over a month to clear Kitazawa. 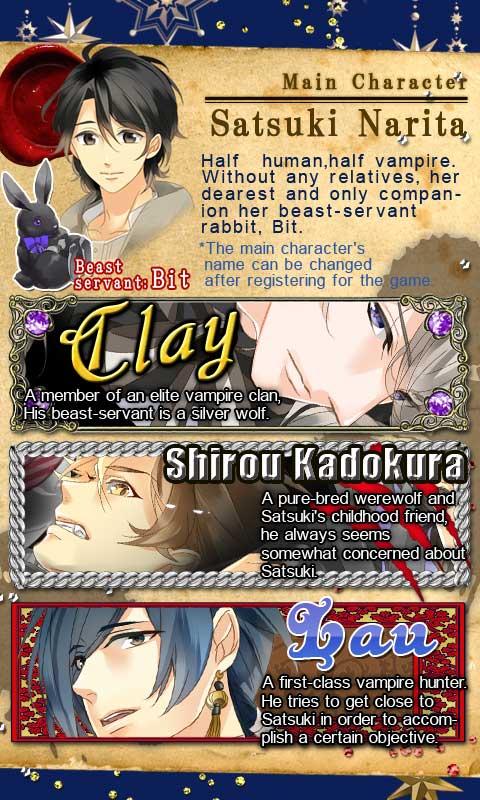 A heartrending tale of love between supernatural beings. The vampire: predator of humans. Satsuki’s father was one of those supernatural beings, and has lived his life singled out as a half-vampire. However, the leader of the vampire clan, Clay has long protected him, and the young leader of the werewolf clan, Shiro, has long yearned for him. To top it off, the vampire hunter Rou is about to make his appearance.

This is a BL dating sim, I figured why not since I read Yaoi and figured this would be amusing to play. I am still playing this and have honestly forgotten which route I am on…

Seven Hotties, All My Husband

Suddenly you become the wife of all of these 7 handsome men at once! However, you will have to follow 3 requirements as their wife…Your character is a a freelancer designer. Everything is good with her job but no so much in the boyfriend department. She wants to marry a hot guy. She wishes on a a shooting star that suddenly flies by. The following morning she wakes up in a castle-like mansion not sure of who the guy is that is hugging you.

I chose the corrupt lawyer, Soichiro Tachibana. Which I am still busy with his route although near the end. I started over a month ago! 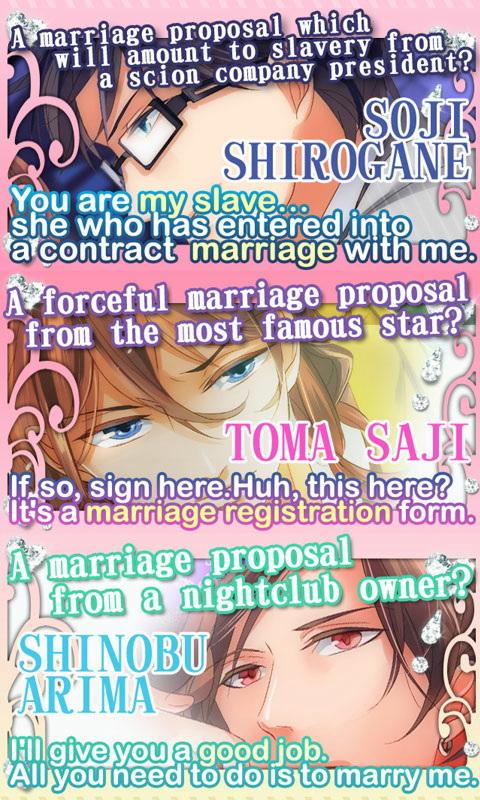 Your once ordinary life is turned upside-down when your father’s business suddenly goes bankrupt. The debt is an astounding 50 million dollars! You’re determined to help him in any way you can, but how?! Suddenly a hot guy appears, only to make the craziest marriage proposal ever!

I decided to start with the top of the list and work my way down again. Souji Shirogane, the attractive young president of the Shirogane Corporation. Celebrity and president of an IT firm. Also still busy with his route.

Hot princes from around the world spring marriage proposals on your character who is a a linguistically gifted correspondent. As such she goes  with a client to a party filled with foreign socialites that turn out to be princes.  The next day as she is about to fly back home at the air port she gets caught up in an investigation! Coming to her rescue is a prince from the night before.

I went with Asena thinking what the heck, why not and yup you guessed it, I am still busy with the route. 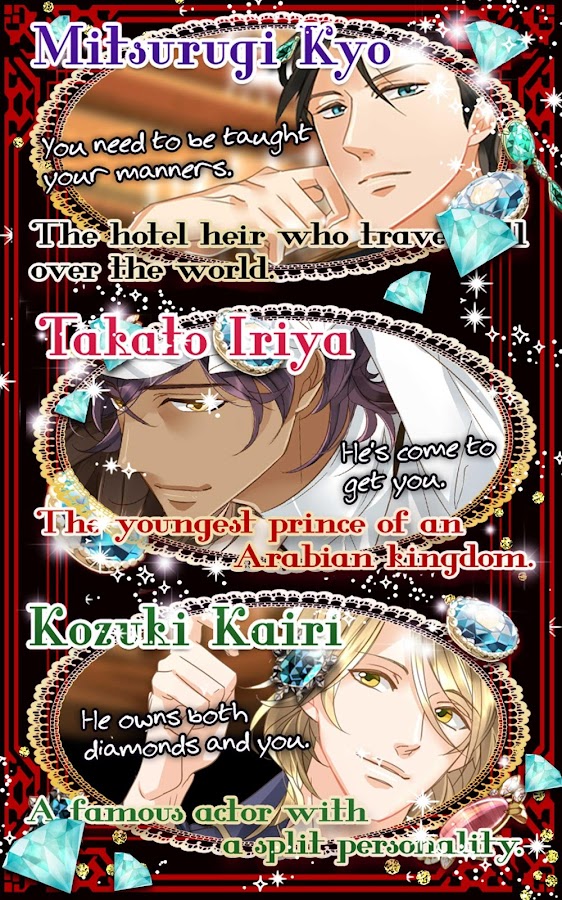 Tricked into being sold as a slave in a black market auction by your boss. There are men and women bidding on you and you are eventually won by a man.

I went with Mitsurugi Kyo and was really surprised that this game is nowhere near as innocent as the other dating sims. Although it is a pretty dark game with slave auctions and what is basically rape so if you have an issue with that don’t play it!

Once Upon a Fairy Love Tale

Working overtime until late at the office to make a deadline, you doze off at desk. All of a sudden, a white rabbit appears in front of you, stealing one of your documents and running away!  Chasing after the magical creature, you fall into a mysterious black portal. You wake up to find yourself in a gorgeous bedroom in a fairytale-like castle!  You’ve been crowned as a queen of this enchanted land and 7 different princes are showering you with marriage proposals!  In amidst of all the confusion, you have to choose one of them to be the king and save the world.

I chose Kite because he looked like the childhood friend from the real world. I am still playing this as well.

As you can see that is quite a list and there is one simple reason, I needed to hop from game to game purely because there was not enough with just one. Hear me out. So you get 5 tickets which lets you play 5 scenarios. Those segments go past so quickly and then you need to wait until the next day when you can play again. So it takes a while to get anywhere in the story for any where. If you have been around the blog you will know I am not overtly patient.

So if each segment goes by so quickly, why am I still busy with basically all of the games and the routes I started with over a month ago? Simple, I don’t spend money that the random ‘challenges’ the games force you to do before continuing the route make the game take longer. Some of the challenges then take days before I can clear them. Which has tainted my experience with the games. Although I do understand that they do need to make money, but they should have an easier way of clearing the challenges for those of us who don’t spend money. There are a few on the list above that I honestly enjoyed but have basically lost interest and stopped playing because in a week of daily play I still have not cleared the challenges.

Overall I much prefer RPG’s but honestly I have enjoyed these but doubt it will become a habit for me. I am looking forward to having space on my phone again once I have finished playing all o these. There just was not enough interaction in the actual game for me, not enough story options within the routes.

What are your thoughts on dating sims?

6 thoughts on “I tried a dating sim, or rather several…”