Kinoshita Mairu is troubled, she is called the poison mushroom by her classmates and has even taken to calling herself that as well. All because she is ugly. She is even apologetic to her cute name because she does not live up to it. Even her own brother treats her with disdain. However due to being tricked into falling into a hole and being told that ‘being ugly is not an excuse’ she decides to change. She reaches out to her transvestite neighbour who gives her an entire makeover. Will she be able to finally experience what it is like to be cute and will she be able to fall in love and have a boyfriend?

This was a really sweet read, although the MC struck me as the type of person who could not survive without a guy. Which is a pity when taking into consideration all that she has previously gone through.  She has such very little self-esteem. I worried over the fact all she seemed interested in was finding a boyfriend.

This manga shows so many awkward and painful moments of dating while young, some of it was just painful to witness other parts were really amusing. The way she kept looking for another boyfriend was frustrating but I enjoyed the fact that just because she became ‘cute’ she didn’t suddenly have thousands of admirers and she still did not really have friends at school. Sad yes but it just drove home that looks are not the only thing that matters.

The story flowed well and it was easy to read. There are a few good plot twists and turns and the characters are done well with multiple layers of depth. The artwork is smooth and overall I like it. The style is steady and not overly jumpy.

I would like it if she could work on her self-esteem a little and come to realise there is more to her than her supposed ‘mushroom’ state. That it is not just the looks that matter.

Spoilers start here, read on if you don’t mind, you have been warned.

After being tricked into falling into a hole she decides to change. She no longer wants to be ugly. The very next day she is back at school and people can’t recognise her straight away. She has had her hair coloured and styled, nails done and even her make-up. Plus she has ditched her glasses for contact lenses which complete her makeover.

Being a girl I fully understand the whole concept of getting a makeover and it actually takes a lot more guts than you would think. However, I find it rather typical and slightly sexist the way it took for a physical makeover to ‘girl-i-fy’ her for her to actually be seen. Also, how is she a total cutie? It’s the genre I know but seriously? Okay moving on.

Quite clearly her choice in guys seriously sucks. The first boyfriend cannot really be classified as a boyfriend since they technically did not actually date.  After one minute and a few seconds, it does not count. Then her now ‘ex’ becomes her stalker? Which is kind of sad. I admire her first few thoughts of ignoring the way he looks and I laughed at the way that crumbled after he started talking.

The second boyfriend I did not like from the get-go. However, the manga took a painful turn as she dived head first into her new relationship and even abandoned the only actual friend she had just because her boyfriend was jealous. Then the relationship took an unexpected turn after watching their awkward progress and came to a sudden and painful end. Although I was happy to see Tenyuu come back into the picture. As soon as he came back into the picture I was really happy and I started to really ship them together.

However, neither showed any actual interest in one another that way and I was left wondering where was this going and perhaps I misread their friendship.

She goes through yet another makeover since her break up really took its toll on her. To avoid life really she became obsessed with comedy.

Enter boyfriend number three. An older working guy who she met on the internet, in his defence, he first thought she was a college student and not a high school student. That is about all the good I can say about him. He quickly showed his true self as he purchased things to ‘buy’ her favour. He also never really took an interest in what she wanted to do, what she liked or even what she was thinking. It was enough for him as long as she just listened to him and did as he said.

I was so happy when she stood up for herself telling him that she mattered as well. I had hoped at this point she would notice Tenyuu and that they might start something, although there was no development. However, her childhood friend and neighbour was another good guy that I was willing to support.

It was interesting watching the way they interacted and how she struggled to learn how she felt and then discover how she really felt.

I really like the friendship between her and Tenyuu. Even though they seem to think of their relationship as ‘father and daughter’ I can not help but hope that there will be proper development and that they will realise that the bond between them is more than friends and not that of parent and child. 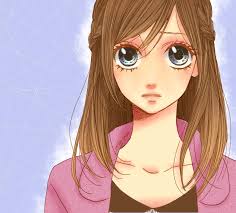