Evangeline was one of the very first vampires I had met in an anime and she has remained one of my favourites even after all of these past years. She just stuck with me as a wilful character and she was one of those that I wanted to understand. Seeing her again after so many years and with an older perspective I still admire her and wonder how has she kept her sanity?

When she was turned into a vampire she had to work hard to overcome the weaknesses. As such she is no longer affected by the sun. She also learned magic which then earned her the title of a witch making her both a vampire and a witch. She has an issue with others calling her ‘Shorty’ and ‘little’. She grows bored really quickly during peaceful times and gets irritated by her fellow classmates attitudes.

She had been trapped for 15 years at Mahora Academy due to Negi’s father, the Thousand Master. Being the devilish character she is she easily attacked the people in her school and drained their blood in order to increase her own power. Then she started attacking Negi in the hopes of draining his blood and breaking the Thousand Master’s spell which would grant her, her freedom. 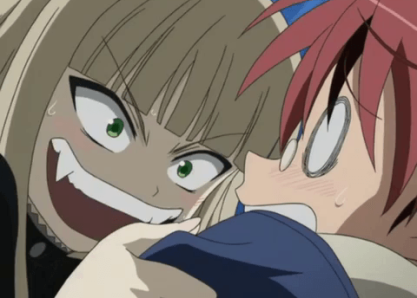 Evangeline specializes in ice-based spells and dark magic. Even when she is devoid of her magic she is still a very skilled fighter, easily taking down a man twice her size. She eventually becomes a teacher and guide to Negi. Although she retains her cold and proud personality.