I finally watched an anime about tennis! A friend of mine recently got back from America and he let me get a hold of his external. I really was happy as I managed to get over 800gigs of anime I did not have. Baby Steps was one of those. As per the norm, I had no idea what it would be about when I first hit play. I was really surprised that it was an anime about tennis!

Eiichirou Maruo is a diligent student dedicated to creating precise notes for school. He does not really have other interests or hobbies. He just goes day by day. Seeing that he has one day a week open he decides that he wants to fit in some exercise to keep his body healthy. He goes to Southern Tennis Club (STC) for their free trial. During the free lesson he meets a fellow first year in his school, Natsu Takasaki. He learns that she is aiming to go pro. However, he also passes out during the lesson, but he is invited back for another try.

What I really enjoyed about Baby Steps was that the main character was not a natural genius. He did not magically get better in a ridiculously short matter of time. He also does not win every match after only practising and learning about the sport in just two weeks.

Eiichiro’s methodical nature allows him to diligently practice the basics repeatedly for hours on end in the time he has available. The show makes it obvious pretty early on that one of his strengths is his note making ability which he also uses in tennis.   So much so that he also makes notes and refers back to them during his various matches. It sounds kind of dull but watching it was actually fascinating.

The romance aspect was so innocent and I was surprised at the subtle and often humorous reminders of this aspect. It captured teenage crushes quite well. One person not realizing they like the other. The awkward steps forward without actually going anywhere. Liking one person who likes your friend so trying to help both your crush and friend even though the friend is the rival to your love but wanting your crush to be happy. Baby Steps covered an array of scenarios for romance.

The art work while simple was detailed. The background was still with the audiences so there was very little to distract from the main actions in the show. They explained the aspects of tennis rather well so much so that a newb like me could understand it.

The characters were interesting and fun to watch. There probably could have been a tad more to the characterization but they were done well enough that they are not ‘simple’ but do have actual depth.

Overall the anime was really cute and I need to find the second season to watch it. I enjoyed watching Eiichiro find something that he actually enjoyed and forged a way forward for himself. I could relate to his pain and suffering and of course his stiffness after exercising and I probably enjoyed it a tad too much. 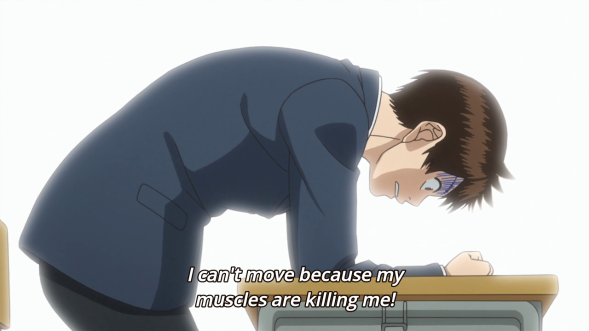 One thought on “Baby Steps Review”