Happy Haloween everyone! Here are five horror anime you can watch this Halloween for some horror festivities. I don’t know about you, but I really enjoy horrors when they have a decent plot point and proper intrigue. Below are some great horror anime to watch. 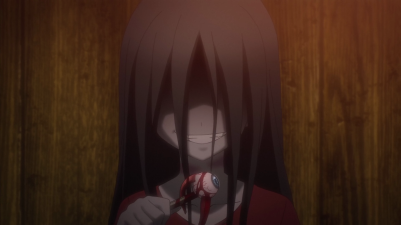 A small group of high school students and a teacher perform a ritual to remain friends forever after a school festival. The charm used a small paper doll which at the end they tore apart. Each needs to keep their piece and as long as they do they will remain friends forever. However, something went horribly wrong. Unknown to them, they have just taken part in a ritual that has sent them to Heavenly Host Academy—an elementary school that was destroyed years ago after a series of gruesome murders took place, a school that rests under the foundation of their very own Kisaragi Academy. Now the group are separated and trapped in an alternate dimension with vengeful ghosts of the past, the students must work together to escape—or join the spirits of the damned forever.

Accepted by chance to the elite Hope’s Peak Academy, Naegi is an ordinary student in a school full of exceptionally talented students. Soon Naegi and his fellow students are imprisoned within the school and are forced to murder one of their peers without being caught in order to graduate. However, if the killer/s are discovered they will be executed.

Shinichi’s is battling for control of his own body against an alien parasite which has taken over his right hand. Other than that Shinichi is an average high school student who suddenly finds himself having to fight for survival against other parasytes who have successfully taken over their hosts.

Ganta is the sole survivor from the massacre of his class. He has no memories of the massacre, he can only remember the ‘Red Man’. To gloss it over, he is sentenced to death and is imprisoned at Dead Man Wonderland. When arriving at the prison Ganta is fitted with a collar that releases poison into his system. To survive he must earn cast points so that he can but an antidote in the shape of a piece of candy, which he needs to consume once every few days. To earn enough cast points Ganta needs to partake in deadly games, he is aided by a mysterious girl, Shino who claims to be his friend and only seems interested in food.

Forced into a bloody battle Yukiteru Amano needs to find and kill the other 11 holders of the ‘future diary’. The diary shows highly descriptive entries based on the future. In order to survive Yukiteru Amano teams up with his obsessive stalker Yuno Gasai who also possesses a future diary.

What horror anime would you recommend to watch this Halloween?

3 thoughts on “5 Horrors for Halloween”