I was so happy to see that another chapter had been released, translated and updated on my app and then in one swift move my happiness was pulled away from underneath me.

After a car accident, Taemin finds himself suddenly in the body of Siwon. He soon discovers that Siwon was a victim of bullying at school. No longer the pushover, Siwon, Taemin starts standing up for himself but then meets Woojin, an old friend from the past. Somehow, Woojin is reminded of Taemin’s whenever he sees Siwon. What happened between these two in the past and how will it affect their future?

Wait what do you mean it is done? I really expected a lot more from this webtoon. The whole story just ended so suddenly that it feels kind of like Haribo might have just lost their inspiration for What Lies at the End or no longer has the time to work on it. The whole way through the story it really felt like there was more. That there had been a big premise that we were going to get to after the whole bit with the twin brother was sorted out. So yeah the ending really took me by surprise and was really abrupt and sudden. Even the promise of side story episodes is not enough to soften the blow.

What Lies at the End was one of those stories that I was reading for the progress between the characters. I wanted to see how they would submit to one another, work through their issues. Resolve the various issues like the ‘brother in the basement’ and the sudden switch between bodies and of course I really wanted to see the duo as a couple. I was honestly expecting a lot more chapters still to come.

I had enjoyed the webtoon a lot. To the point where I would stop what I was doing and read the latest chapter as soon as the notification popped up on my phone because I needed to know what happened next.

The timing could be slow at times but on the whole, always left me wanting more. I enjoyed the artwork and story progression. I enjoyed the tension and awkwardness between the characters as they slowly learned about one another.

I hope that one day the story is picked up again, revised and continued. If you enjoy Shounen Ai I would definitely recommend this to you as one to read but unlike me, you have been forewarned of an abrupt ending. 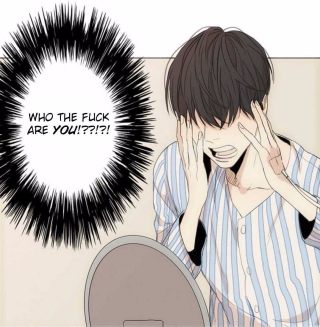 As for the Yaoiness, well, there is some kissing, pinning down and that is pretty much it. There is no nudity or actual ‘deed doing’ in this. The only exception is the rape video which starts off the whole miserable tale and even then, it is a heavy suggestion and you know what is done without anything being seen. I also gotta give credit where credit is due, Haribo really knows how to tease the readers and get our hopes up. There is a lot of innuendo in their speech. 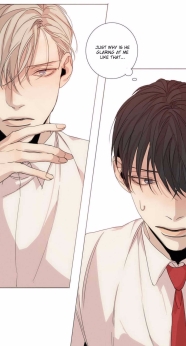 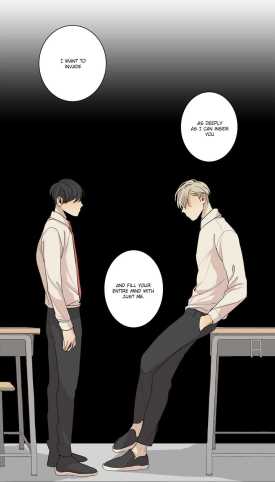 2 thoughts on “What Lies At The End, ended?”