If you have watched Samurai 7 you know how Kyuzo is and what emotion he brings out of you in the end. However this is not a spoiler or a review, this is the breakdown of him as a character. 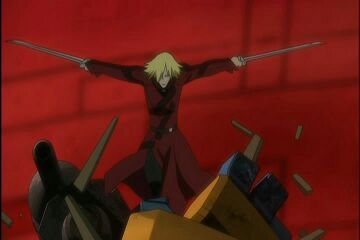 He wears black undergarments underneath his red full-length coat. It is not clear if it black pants and a black shirt or a one piece. His red jacket has black detailing and red clothing with a single sword sheath on his back. He has blonde hair and brown eyes.

He is a mysterious and mostly silent character.  His only desire is to fight Kanbei, a fellow skilled samurai, in a duel to the death once the bandits are defeated. He is recruited into the war by Lady Kiara to bring down the Emperor. However, before joining the team he works as a hired bodyguard for a wealthy family.

Kyuzo is an extremely skilled swordsman at wielding dual (double) blades and an incredible fighter. He is dexterous and quick to think on his feet mid-battle to use situations to his advantage.  He is not particularly loyal to any one cause and switches sides depending on what he will benefit from or get what he wants. However, he did save Kanbei, using the excuse that he wants to fight him to explain why he saved him. Although, I think that while that was true, it was not the only reason he saved him. He was not quick to trust anyone and tends to rely on his own strength and skill.

Kyuzo is Voiced by:

Honestly, there is not much to say about this character, other than he has earned my respect and that he has left a mark on my heart. He is one of the characters that will forever remain with me.

What are your thoughts on Kyuzo? Are there any particular characters you would like us to break down? Feel free to list your favourite and worst characters and we will do the research and get their history.