If you follow me on any of my socials, then by now, you may have already guessed that I have Netflix. At first I had Showmax and weighed the pros and cons of Netflix. For those who don’t know, Showmax is like a South African Netflix that offers local shows and such as well as movies.  I then went through a stage where I had both and not long afterwards, I dropped Showmax. There are a few reasons for this.

I had been hesitant over getting Netflix mainly due to the unknown price and knowing that they charge in dollars. It was only after actually checking out Netflix that I learnt that it is $10 a month. Which in all honesty is not bad. Each month my bank account is deducted the equivalint of 10$. Thanks to our exchange rate, I don’t have a consistant amount I pay. Some months is more and some is less. Currently I will be charged R118 for Netflix if the exchange rate remains the same. The most I have paid so far, is R160. So if I budget a max of R200 I am in the clear with some change.

I also rather like the way we can split Netflix between multiple ‘accounts’ where we can each watch our own thing without messing up the recomendations or watch list of someone else.

Plus I rather enjoy their wide selection and that they are constantly adding something new. Their orginal shows, movies etc I have found interesting and have come to enjoy them quite a bit. There is always something to watch and my favourite part of streaming, no adverts!

The main reason I got Netflix however is because Netflix has anime.  While their selection is not the biggest or the best, but it is a great start and I have a feeling that it will get more as time goes on.

I also like the fact that Netflix is also making their own anime which I think is pretty cool. There have been some ONA’s (Original Netflix Anime) that I have really enjoyed. It is really easy to use and I love that I can easilly choose between sub or dub. The dual audio of the anime really suits my current busy lifestyle. So while watching anime I can do other things like a multi-tasking master. 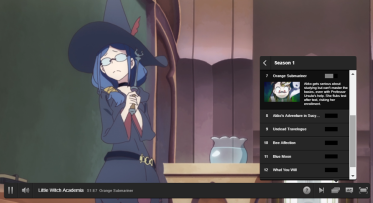 The data consumption is quite high though, especially since three of us can be found watching our seporate shows at the same time. We can easily go through 2/3 gigs every hour. Thus, I am overly happy that we have an uncapped line.

What do you watch on Netflix?

One thought on “Netflix in SA, is it worth it?”