I was in one of those moods where I did not know what I wanted to watch, I just wanted to watch something.  I eventually settled on watching Castlevania and got comfy expecting a decent anime and I can happily say that I was not disappointed.

When Count Vlad Dracula Tepes wife is burned at the stake he declares that all the people of Wallachia will pay with their lives. Giving the humans one year to make peace with their God, he gathers his army of monsters and demons. Trevor Belmont, from the line of disgraced demon hunters, is unwillingly drawn into the fight as he aims to rescue the ‘Speakers’ who are to be slaughtered for bringing the demon hoard to the city.

Just to clarify, I watched this in dub and was pretty happy with it. I loved the dialogue, although I was reminded of my Dragon Age gaming days. Which probably added to the charm for me. Yet saying that, it does have the game style dialogue at points where you do think you are watching a scene from a game or listening to NPC’s talking in the background or when you are asking for the store. Which I don’t mind considering the basis for the anime are the Castlevania games.

This anime is quite graphic and gory, which makes sense since it is a story about a vampire going on a rampage and unleashing an army of demons to completely eradicate humanity. If you did not see the violence coming, well then, you probably stepped into the wrong genre.

The way priests are depicted could be taken the wrong way. They are the cause of Dracula’s wrath and are shown to be corrupt and self-serving. However, they are not only shown this way. There is a scene where Trevor does ask if there are any holy ordained priests, but he is cheeky when he asks if they know what to do with water. So yay for not having all of the priests shown as dirty scum bags. History is a dark thing, and sadly priests do have a pretty bad reputation.

I appreciated the various nods towards history. Like with the origin of Dracula, Vlad the Impaler (who was a real person). This was done quite cleverly in the dialogue near the beginning of the very first episode, as well as Dracula’s name and of course, the not too subtle, impaled skeletons. Okay, I may or may not have a fascination with vampires *coughs while hiding The Element Encyclopedia of Vampires* 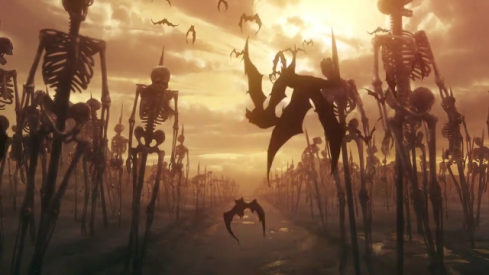 The animation itself is really stunning and really captivated me. The emotion and mood of the characters was clear and so very easy to see and understand even without the dialogue to accompany it.

Favourite character: I so want to say Alucard. I mean he really is gorgeous and I like his style but I am going with Trevor for this one. I liked him from the moment we first see him in the tavern and then every moment afterwards he just got better and better. I love how great he is with his whip and sword while not being overpowerful and overcoming everything with ease. He is rough around the edges, rude and past the point of trying or caring to be everyone’s hero. However, even though he is unwanted and disliked by the masses he decides to uphold his family’s honour.

Stuff it, my favourite character is both Trevor and Alucard. Why should I limit myself to only one? hehe… 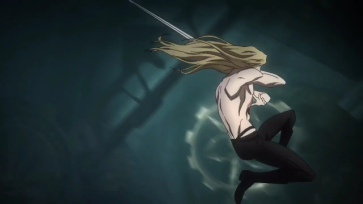 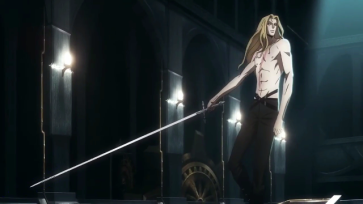 Would I recommend this anime? Very easily, yes I would. The anime is good, the story has promise plus I enjoyed the dialogue and the humour. I am really hoping that we get a second season and that these four episodes are not all that we get. The four are just honestly not enough for me. While a lot happens in the season, it truly is only the beginning and I was honestly upset as I ended the last episode fully expecting episode 5 to start. I searched to see if it was a weekly release only to be disappointed that I had watched the entirety of the season.

6 thoughts on “Castlevania, why are you so short?”