Oh my gosh, I can’t believe we are already basically 4 weeks into the ‘new’ anime season already. This Autumn Anime Season 2019 has proven tough in choosing which anime I shall be dedicating my time towards. There is a big selection of follow up seasons to a lot of series I am following. So without delaying this any longer, here are the 10 anime that I am watching this season. 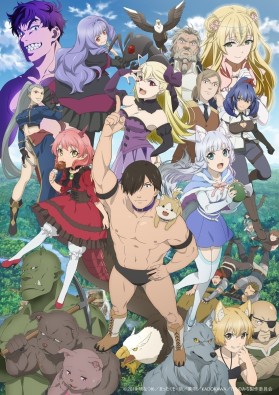 What is it about: Professional wrestler and animal lover Shibata Genzo is suddenly summoned to another world. Greeted by a princess, she requests to get rid of the evil beasts roaming in this world. Outraged that he was asked to kill monsters, Genzo German suplexes the princess. Unable to get back to Earth, he decides to live a peaceful life and manage a “monster” pet shop.

Why I want to watch it: This is a series that instantly got traction on my Facebook group and was highly recommended to me, to be the guinea pig and let others know if it was good and worth the watch. Thus, I instantly added it to my season list. That and the concept honestly intrigued me. Although all of these Isekai are really starting to get ‘old’

What is it about: Zen Seizaki is assigned to a case involving false advertisement, Zen—along with his assistant officer, Atsuhiko Fumio—investigate Japan Supiri, a pharmaceutical company that had provided fabricated clinical research on the company’s new drug. While investigating the file of Shin Inaba, an anesthesiologist connected to the crime, the case takes a dark turn when Zen finds a page stained with a mixture of blood, hair and skin, along with the letter “F” scribbled all across the sheet. As he investigates further, the case goes beyond Zen’s imagination and becomes vastly complex, challenging his sense of justice and his knowledge of the truth.

Why I want to watch it: I really enjoy mysteries and detective styled storytelling. The thriller tag also got my hopes up. I am watching this in hopes that it will be one that will get into my head and really get me thinking and not be another anime I can watch without paying attention. 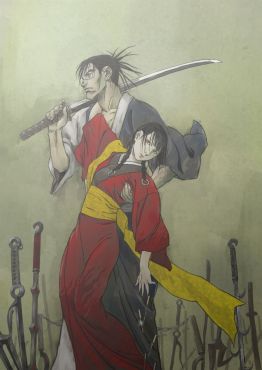 What is it about: Manji is an immortal swordsman, who has been cursed with eternal life. He has grown tired of living with all the death he has created. He has no skills other than those of killing, thus he forms a plan to regain his mortality: he shall kill one hundred evil men for each good one he has killed. The old witch who afflicted Manji with immortality agrees to Manji’s proposition and Manji is set on his path to kill one thousand evil men. On his journey, he meets a young girl, Rin, who has her own vengeance to seek against the sword school whose members slaughtered Rin’s family. Rin and Manji journey together, each hoping to find some kind of peace. In their way are many varied enemies. Rin and Manji are almost constantly under attack and must learn to live their lives, avoiding being consumed by revenge.

Why I want to watch it: This is a remake/revamp of an anime with the same name. I watched the now ‘older’ version a couple months ago and really enjoyed it. So much so that I even started on the manga. I have stopped with the manga, to watch this new adaptation. I am hoping this adaptation gets further into or completes the story, unlike the older version. Once the anime is done, I shall start up on the manga again.

What is it about: In the world where only the aristocrats have the power to fight the monster—mana. A youth named Kufa is dispatched as a tutor to find Mareida’s talent, a nuisance girl born in a duke’s family. If she is not talented, assassinate her—that is the dark side of his task…

Why I want to watch it: This is one of the manga that I have been reading for a while. So when I saw that it was getting an anime adaptation I figured I should at least give this one a go. Especially because I did binge the manga and I am hoping the anime will get the same response.

What is it about: When the eldest daughter of the Ascham household, Adele, turned ten, she remembered everything from her past life when she was hit with a strong headache. She was Kurihara Misato in her previous life, who died when she was 18 trying to help a little girl, consequently followed by an encounter with God. During their meeting, she pleaded to lead an average life with average skills. After all, her somewhat capable self has been burdened with all the expectations brought up to her. However, things don’t just go quite as planned as she has to be careful not upping to the S-ranks accidentally if she wishes to maintain her desired average life.

Why I want to watch it: T 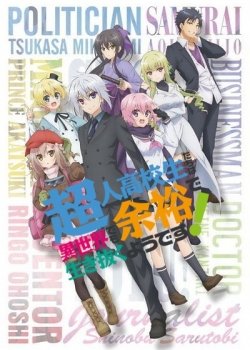 What is it about: Seven high school students that got caught in an airplane accident wake up, in a middle age like fantasy different world where magic and beast-man (juujin) exist. But they do not panic at their current situation!? They build a nuclear plant in a world without electricity, they control the economy of a large city in a short work’s trip, and finally for their benefactor’s sake who are suffering from the misgoverment, they declare war on the evil nobles. So… none of them is a normal high school student, each of them are super human high school students that stand at the top of politics, economics, science and medicine! This is a story of a dream team that possess earth’s greatest wisdom and technology, that without any self-restraining bring a revolution to a different world with over-technology

Why I want to watch it: This is one of the manga 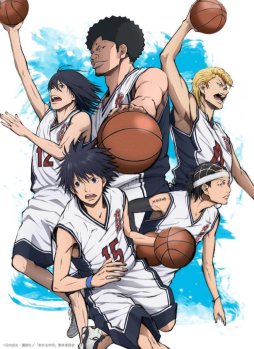 What is it about: He may be shorter in stature, but Sora Kurumatani can soar and score on the basketball court! With a passion for the sport he inherited from his mother, Sora vows to her that he’ll take top prize at a high school basketball tournament… but there’s one problem. His new school’s basketball club has turned into a hangout for delinquents! Will Sora’s sheer tenacity and amazing three-point shooting change their minds and get the club up and running again?

Why I want to watch it: I have not watched a basketball based anime in a while and thought to give this a try. I honestly had mixed feeling over Kuroko no Basket so I have mixed feelings over whether I shall enjoy this one or not. However, I will still give it a try.

What is it about: Suzuki Iruma has been sold to the demon by his irresponsible parents in exchange for money. Surprisingly, next thing he knows, he is living with the demon and has been transferred into a school in the Demon World…

Why I want to watch it: I had instant flashbacks of Rosario + Vampire from the similar school setting. Other than that I added this to my current season watch list for the comedy potential and for a break from the isekai.

What is it about: The East Side of Shinjuku Ward… The neon-lit Kabuki-chou district stretches across the centre of this chaotic city. Where light shines, there are also deep shadows. The curtains rise on this night stage where bizarre murders occurred! Is this suspense? No, comedy? An indistinguishable drama is about to begin…

Why I want to watch it: Yay another mystery to add to my list. I am in full blown ‘detective’ mode and really want anime that will get me thinking. As such, with sherlock in the name it was a no brainer to add to my list. I did read the synopsis first though and that only made adding it to my list even simpler. It was you could almost say it was ‘elementary my dear watson. 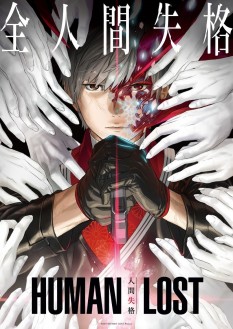 What is it about: Tokyo, 2036 (Showa year 111): a revolution in medical treatment has conquered death. By means of internal nanomachines and the “S.H.E.L.L.” system whose network controls them, human beings suffer no diseases, require no treatment for injuries, and are guaranteed a 120-year lifespan, free from illness. Youzou Oba, who lives an idle, drug-saturated life, joins Masao Horiki, a mysterious man who associates with the drag-racing gangs, on an incursion Inside—the area within the Route 7 loop where the privileged class lives—only to be embroiled in a violent struggle. When he encounters a malformed sufferer of the Human Lost phenomenon, a “Lost,” Youzou’s life is saved by Yoshiko Hiiragi, a girl of mysterious abilities who belongs to the anti-Lost agency H.I.L.A.M., and he discovers that he himself also possesses extraordinary powers…

Why I want to watch it: This simply sounds interesting. I am really looking forward to the movie.

Since the below are continuations of anime, I do not really consider them to be ‘new’ anime per say and thus don’t include them in on my season list but I still want to mention the sequels I am looking forward to.

Nanatsu no Taizai: Kamigami no Gekirin

Shokugeki no Souma: Shin no Sara

What anime are you planning on watching this autumn? (^^,)

2 thoughts on “10 Anime I am watching this season”