Well, Crunchyroll did it again, made me watch, Mysteria Friends, an anime I would not have picked myself. To my surprise, I did not ask for another ‘random’ anime straight away. 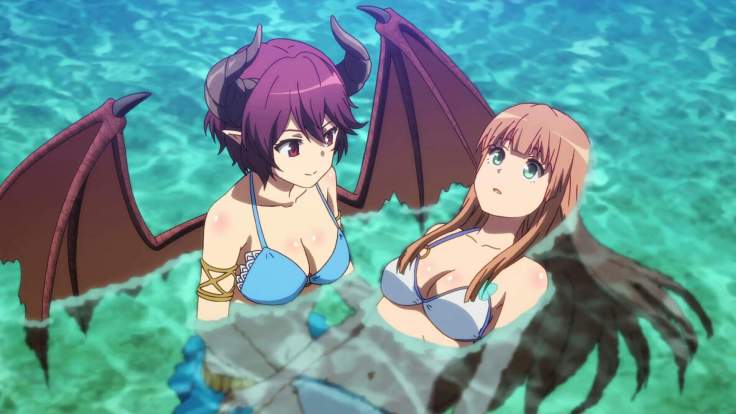 Mysteria Academy is a prestigious magic school that teaches magic without discrimination to the three factions (men, gods, demons), who usually are engaged in battle with each other. Two of the academy’s students are Anne, a princess and honour student, and Grea, a princess born from a dragon and a human.

My Thoughts on Mysteria Friends:

This anime has not been on my list of anime to watch as the write up had not really screamed ‘watch me’ when it first released earlier this year. Leave it to Crunchyroll‘s random selection of the anime to show me that I had missed out on a mini gem.

Plot-wise, there wasn’t any form of A to Z storytelling. With every episode, the credits followed by a post-credit scene was not really the wisest of moves. If I had not seen the amount of time left of the episode, I would have skipped straight to the next episode and missed out on almost half of every episode.

Basically, the 10 episodes follow the daily shenanigans of two princesses, one human, the other half-dragon and shows off their friendship. More than friends but not quite lovers, well, nothing that is shown on screen anyway. There are a few ‘suggested’ scenes that really had yuri undertones but it is ultimately up to you as the viewer to decide how ‘deep/close’ their friendship is.

The anime can be summed up as two cute girls doing cute things. They swim, play hide and seek, take part in an evacuation drill at school and mostly enjoy their time together.

In the anime, they do touch upon the girl’s insecurities from feeling useless, left out and body image concerns. As well as portray how delicate and precious a time it is for them. I am honestly surprised that Mysteria Friends does not automatically have the Slice of Life genre tag on sites like MyAnimeList. I have added the genre tag as I believe it fits Slice of Life perfectly, albeit a supernatural one.

Would I recommend Mysteria Friends? As a light-hearted, easy watch and non-serious anime, I would. It is a perfect ‘breather’ anime for when you have just finished one anime and are still undecided on what to binge next.

What did you think of Mysteria Friends?

One thought on “Mysteria Friends, a perfect breather anime”