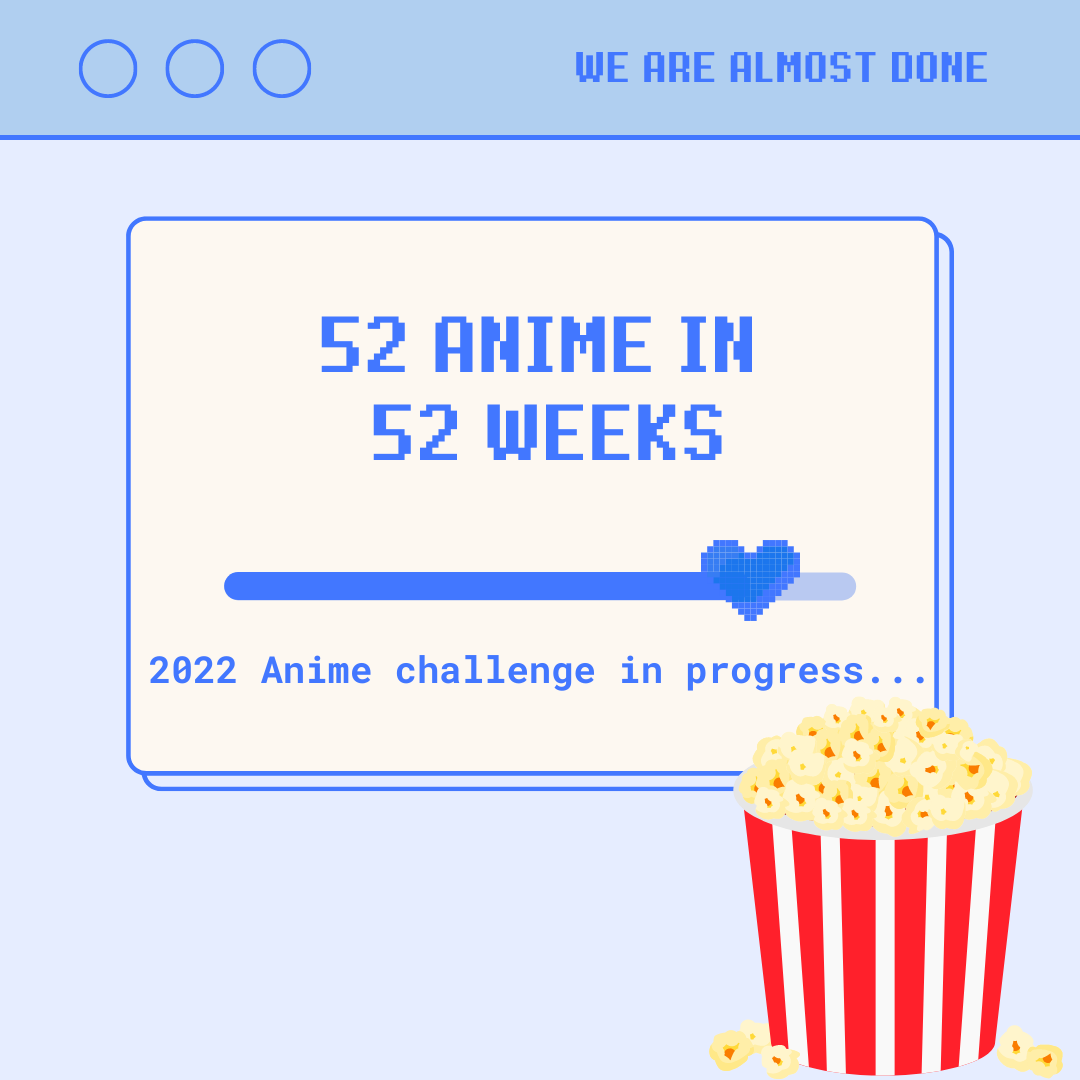 October was an insanely busy month between birthdays, social events, and visits with family and friends, plus a bachelor’s and a wedding. There was very little downtime for me during the month, so it makes sense that I have once again fallen behind on my challenge, as well as all of the posts that I had planned for here on the blog and why my social media accounts have been so quiet.

I personally start my challenge week on a Wednesday and end it on a Tuesday. Here is how October, weeks 40 to 43, of my 52-week challenge, went for me.

I watched Bayonetta: Bloody Fate as my 40th anime for this challenge, and it was pretty. It has an intense introduction, and I liked the characters instantly. I also fell in love with the outfits. Yes, it is an anime movie, but I still count it towards my challenge. The plot line is interesting to watch as it unfolds. The action was fluid and captivating. After ComicCon Africa, I really needed something quick, easy, and not at all complicated to watch. This is why I chose an anime movie, it had been on my to-watch list for a post I planned and now have scheduled for next year. I do recommend you give this movie a watch. It is quirky and fits my idea for an anime movie that is not part of an established anime franchise. It meets the randomness of old anime movies while mixing in the style of newer anime while calling up the nostalgia of my Animax days. I do feel that week 41 balanced out the movie choice and makes it so it’s not so cheaty.

There is a lot more to the Free! anime than I realised. There are multiple movies, three seasons, and OVA episodes. I knew about the multiple seasons but did not factor the rest into consideration when I was picking the anime for this week. If I had, I might not have picked this as one to watch in week 41 as my 41st anime. Despite saying that I watched the first two seasons and a movie in one sitting. I now have a screenshot collection with over 1000 screenshots. I love the boys and wish I had watched them years ago and gotten to enjoy the anime as it was released. Free! Was an anime that I had put on hold five episodes into season one. I can no longer recall why. For an anime with a lot of characters, I am surprised that there is not one character that I honestly dislike. The guys get proper development, and I love to see it. I see why people call Free fans out for liking it for the body shots and shipping, but honestly, there is more to the anime than what is given credit. I enjoy both the plot lines and the “plot” we female anime sports fans get.

Exception is a really good story-based anime. It took a moment to adjust to the animation and character design, but it was so worth the watch. I’m glad I saw it. The concept of fully printing conscious copies of 3D humans is interesting. I do not see why the solar flare would cause such a drastic physical alteration to Lewis. (Ah, the ending explained it; it was a good explanation, but I am still not completely sold on the reasoning). Although I agree with the crew’s initial decision, their handling of the resulting events was somewhat poor. But considering there are so few of them and so much work to be done, it is understandable. The traitor and the reveal were good. I enjoyed the conflicting moral sides, and I can understand both. I would have liked to have seen more, learned more about the characters, and seen them interact more. That way, the betrayal would have been more impactful. However, that would not have fit into the 8-episode time frame allocated. I doubt we will get a second season as this does seem like a stand-alone season. I do question whether the originals would have kept their word or would have terminated their printed copies rather than pulled them out of cryosleep.

Musings on the 52 anime in 52 weeks anime challenge:

I fell behind again! I was meant to complete four anime during October but only managed three. I am conflicted about this, but I also am not because of my completion of FREE. That had been a bigger undertaking than I had ever anticipated. All because I wanted to get screenshots.

The conflict comes in because I was so close to staying on track, and I am frustrated because the end of the challenge really is in sight.