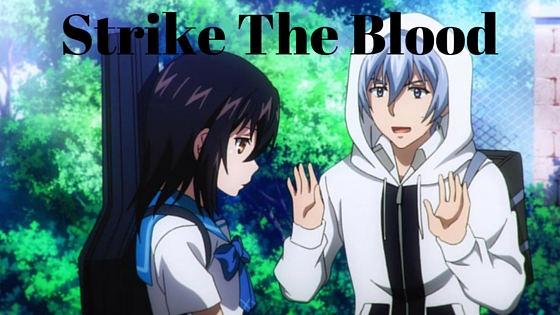 The anime follows Kojou Akatsuki. He is a vampire in high school who is a bit reluctant to show his powers. Yukina Himeragi, a teenage Sword Shaman apprentice is assigned to observe him and eliminate him if he proves to be a threat.

Kojou Akatsuki is a ‘virgin’ vampire, meaning he has never tasted human blood. This causes problems as his familiars won’t accept him until he drinks blood. He is eventually forced to drink blood in order to save himself and his friends.

The story takes place in the Demon District in Itogami City, a man-made island off the coast of Japan that has a freely mingling monster populace.

Kojou is suspected of being the Fourth Progenitor, a powerful vampire that could potentially disrupt the balance of power among the ruling three Progenitors. Kojou and Yukina befriend various monster students, some of whom are attracted to Kojou, and whose situations drive his libido that provides the source of much of his power.

As Kojou’s group of friends expands the challenges become more complicated and he is forced to take on more responsibility.

I enjoyed the series I just wish it had ended differently. The random jump to the future was a little unexpected but it was also a clever way of answering multiple questions.

3 thoughts on “Strike the Blood”