When I mentioned that I was now watching this I was asked by a few people about what I thought of this anime. So I just knew I had to do a review on this. Then I debated doing a review on all 3 seasons, or do them one at a time. I decided to do it one at a time. That way each season gets a fair and full review without being rushed through. So without further ado:

Tetsuya Kuroko  is a freshman at the newly formed high school, Seirin High. He has hardly any presence at all, he is quite frequently overlooked and forgotten. He had been part of the Teiko Middle School basket ball team which rose to distinction with the team demolishing all of their rivals. The regulars of the TMS team had been dubbed ‘The Generation of Miracles’. The team consisted of five genius players, Ryota Kise, Shintaro Midorima, Daiki Aomine, Atsushi Murasakibara and Seijuro Akashi. Tetsuya Kuroko had been the phantom sixth man of the ‘Generation of Miracles’ teams. The Generation of Miricles split up when they graduated and all of them went to different high schools. When Kuroko joined Seirin High he also joins their basketball team, which is powerful but hardly known. Kuroko decides to join up with Taiga Kagami  to try and defeat the ‘Generation of Miricles’. Kagami is a naturally talented player who learned how to play basketball in America where he had most of his middle school years. Together they aim to take Seirin High to the top and defeat each of Kuroko’s former team mates with Kuroko’s unique playing style and Kagami’s natural talent.

At first watching this all I could think is, I don’t get why this is having a rivalry with Haikyuu!! (Which I’ll get to in another post).

Then I watched a little more and found myself wanting to scream at the screen ‘teamwork and team spirit dumba*s!’ when ever Kuroko would mention that the Generation of Miracles had been lacking something but he did not know what it was. On the whole, I enjoyed the first season. There were some really stunning scenes where they displayed the full talents of the players and the positions of shots and stuff. However I realised that I myself am not a fan of basketball. As such, I do not know the rules, nor do I know the plays. Yes some of it was easy to figure out like the two point shots and three point shots. I still don’t get why you don’t get one point shots? However let us get back to the point. Perhaps due to the hype, I did expect a little more out of this anime. It was interesting to watch the dynamics of the various teams shown. I was also happy to see that

the team did change during games and not everything was solved or won all thanks to the ‘first year duo’. I was so disappointed that we did not get to see the improved Kuroko in this season, which I suppose was done as a lure for making you watch season 2. Although I did enjoy the fact that Kuroko was not this overly skilled character who dominated the game with limitless potential who none could beat. Kagami was a bit of an irritant in the beginning. Then he grew on me as the season progressed. The way he worked to get better throughout it all, learning about his weaknesses and learning to lean on his team mates to help him overcome them without becoming completely reliant on them. I also appreciated the way that even though they were rivals the players helped each other to improve. I was happy to see the character growth and development. Plus it was nice to slowly learn more about the characters without being inundated with their pasts and I am so glad that there doesn’t seem to be an overly ‘touchy’ backgrounds. On the whole, I wish they explained the rules a little and also explain the positions that the characters play. So just give more info so a sports ditz like myself can understand. That way I will be able to really enjoy the plays and out witting of the teams.

I will watch season two, simply out of curiosity more than anything else. I would recommend this to those who enjoy sports anime, even if they don’t know basketball, like myself. It was interesting to see their struggles and how they worked to overcome them. Making me wonder, how will they face Aomine in the next season? I also want to meet the rest of the ‘Generation of Miracles’. Perhaps I am just too impatient. 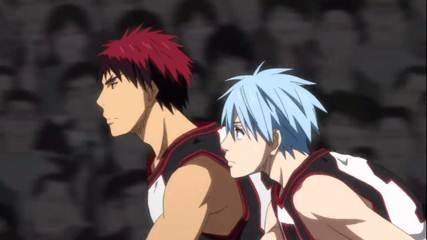 Will you watch this? Have you watched it already? What did you think of it?

10 thoughts on “Kuroko no Basket”