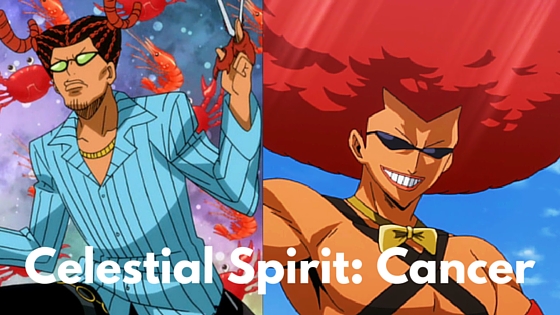 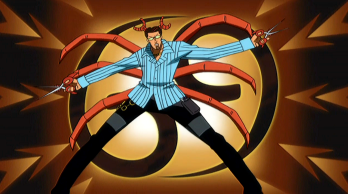 Cancer is one of the twelve golden zodiac keys. His key is currently owned by Lucy Heartfilia.
Cancer dresses similar to a hairdresser. His black hair is kept in red cornrows that end in the shape of a crabs pincers.  He likes to wear dark pants with two stripes along each side and a blue stripped shirt. He wears a ring chain on the right pocket of his pants. On the left, kept on his belt is a hairdresser’s tool’s bag. His sunglasses are tinted green and he always seen wearing them. Sprouting from his back he has six crab like legs.

Cancer uses his scissors to cut through anything be it hair or an opponent.

He ends his sentences with –ebi which means shrimp. This shocks happy since he thought cancer would say -Kani which means crab. Cancer comes across as having a cool demeanor since he isn’t overly emotional or hot headed.

Eclipsed Cancer is on an entirely different level.Instead of the six legs sprouting from his
back and wielding scissors his arms have become two giant pincers like those of a crab. He has a big red Afro. His pants are of black leather and he does not wear a shirt. Like his non-eclipsed self he wears glasses.

He becomes an extremely flamboyant and loves to dance. Instead of “-ebi” he ends his sentences with “-kani”. Cancer also became easily distracted and easily moved, by exceptional dancing of others. He claims that there is nothing that his claws cannot cut, showing that he is proud of them.