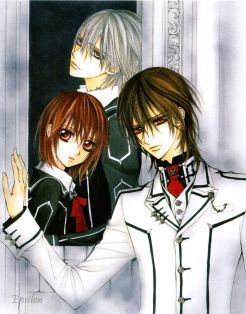 Being attacked by a rogue vampire on a stormy snowy night and being rescued by Kaname Kuran who is a Pureblood vampire is Yuki’s earliest memory. Ten years later, Yuki is a prefect keeping the day and night classes separate with fellow prefect, Zero, at Cross Academy. The academy is run by Kaien Cross, Yuki’s adoptive father.  Kaien Cross has become the guardian of the vampire race, protecting Yuki’s childhood crush, Kaname, from discovery as he leads a group of vampires at the elite boarding school.  Childhood friend, Zero Kiryu, an orphaned child of famous Vampire Hunters.  Zero’s hatred for vampires, the creatures that destroyed everything he held dear leaves him determined never to trust them.

The fragile coexistence at the academy seems to be going well, but will the peace last with so many secrets hidden just beneath the surface? Is all as it seems at the academy and should Yuki remember her forgotten past or should she just let it remain forgotten?

I enjoyed the anime. The plot was well thought out. I binged watched the entire season wanting to know what Yuki’s forgotten past was. Also while watching I kept switching between Kaname and Zero while I tried to decide who she should pick versus who she would choose. The art work is good and despite being labeled as Action there are few actual fight scenes. However the ones that are in are well balanced and entertaining. The fights don’t get drawn out over multiple episodes. The voice actors did an amazing job (I watched the subbed episodes) and the opening and closing songs were really worth listening to and watching. I was not too happy with the way this season ended with more questions than answers but luckily season 2 was right there for me to dive straight into. However that will be another review. 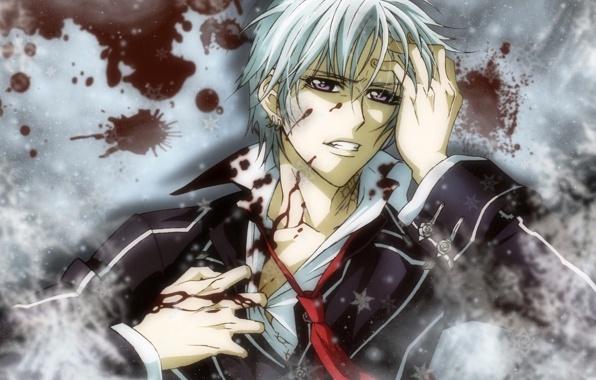 Have you watched Vampire Knight? If so what did you think of it?