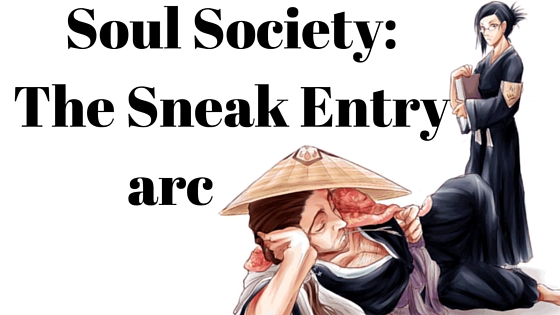 The Sneak Entry is the second arc in the Bleach series. The arc starts with Ichigo and his friends breaking into soul society to save Rukia from her execution. They arrive in Rukongai, however they need to break into The Court of Pure Spirits, where the shinigami live and where Rukia is being held. They run into their first problem almost immediately. A giant wall comes down blocking their way.

Through some unexpected friends the group manages to make their way into the Court of Pure Souls where they get forcefully separated into five groups. Each group must make its way to Rukia. As the groups move about they must each find a way to overcome various challenges.

Amongst the chaos of Ichigo and his friends running around a mysterious person kills a captain. As it becomes clearer that there is more going on than what first appeared the court guards and captains slowly take their places to apprehend the group.

Ichigo’s life is saved multiple times by a mysterious mask that keeps reappearing.  The closer Ichigo gets to Rukia the more we learn about her and her life in Soul Society. Plus his opponents keep getting tougher and the fights become more challenging as he takes on lieutenants and captains.

During this arc we meet many new characters that your attention and add depth to the anime. The characters met in this arc remain throughout the rest of the anime.

This arc ends with Rukia in sight, an imminent battle and the appearance of an unexpected person.

The episodes use five pieces of theme music: two opening themes and three ending themes. The opening theme for the first five episodes is Orange Range’s single “Asterisk”;the rest use “D-tecnoLife” by Uverworld. The initial ending theme is “Thank You!!” by Home Made Kazoku, switching at episode 26 to Younha’s “Houkiboshi” and again at episode 39 to “HappyPeople” by Skoop on Somebody.