As I said in part 1 I will do the anime movies and OVA’s in this post. I had to break this post up into two parts since there are over 30 new anime releases this month. As awesome as that is it just would have been an insanely long post to include both posts together.

Mitsuha is a female high school student who lives in a rural town nestled deep in the mountains. Her father is the mayor and isn’t at home much, and she lives with her elementary school-aged little sister and her grandmother. Mitsuha has an honest personality, but she doesn’t like the customs of her family’s Shinto shrine, nor does she like her father participating in an election campaign. She laments that she lives in a confined rural town, and yearns for the wonderful lifestyle of living in Tokyo. Taki is a male high school student who lives in central Tokyo. He spends time with his friends, works part-time at an Italian restaurant, and is interested in architecture and fine arts. One day, Mitsuha has a dream where she is a young man. Taki also has a dream where he is a female high school student in a town in the mountains that he has never been to. What is the secret to their dreams of personal experience?

Koyomi Araragi, a second year high school student befriends Tsubasa Hanekawa, the top honors student at his school. Tsubasa mentions a rumor about a “blonde vampire” that has been sighted around their town recently. Koyomi, who is usually anti-social, takes a liking to Tsubasa’s down-to-earth personality. Koyomi then encounters the rumored vampire: she is the “King of Apparitions.” The blonde, golden-eyed vampire cries out for Koyomi to save her as she lies in a pool of her own blood. Asking for Koyomi to give her his blood in order to save her life, and when he does, the very next moment he awakes, Koyomi finds himself re-born as her vampire kin.

In 2046, many aspects of life are carried out on a virtual network. No matter how advanced the time becomes, however, bullying never disappears. Haruyuki is one of the bullied students. However, one day he is contacted by Kuroyukihime, the most famous person in the school. “Wouldn’t you like to ‘accelerate’ and go further ahead, boy?” Haruyuki is introduced to the “Accel World” and decides to fight as Kuroyukihime’s knight.

The Straw Hat Pirates are taking on Gild Tesoro, one of the richest men in the world. 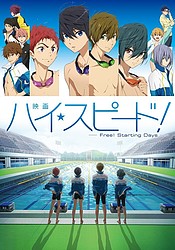 Haruka Nanase feels something special when he touches water. The medley relay was the last competition he was able to participate in during elementary school. Haruka, along with Makoto Tachibana, Nagisa Hazuki, and Rin Matsuoka, saw something they’d never seen before. In spring, with the cherry blossoms in full bloom. Haruka moves on to Iwatobi Middle School with Makoto and starts a new life. Both enter the swim team, and plan to compete in the medley relay together with Asahi Shiina and Ikuya Kirishima.

The story of Kingsglaive: Final Fantasy XV takes place during the game, and follows what happens to King Regis after Noctis leaves on his trip with his friends. 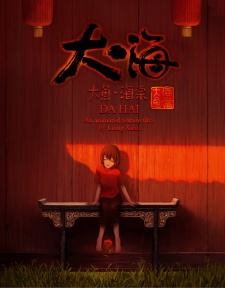 This is a mythic land where no outsider has ever set foot. The spirit-like dwellers there, however, know us mortals well. They are responsible for human emotions and desires, for seasons, weather and the elapsing of time. Chun is a spirit girl and has just turned sixteen. She goes top explore the human world as a dolphin and ends up ensnared in a fishing net. A human boy spots her and comes to her rescue, trying to free Chun from the entanglement. By accident, the boy drowns leaving Chun wretched and heartbroken. Chun is determined to bring back to life the soul of a boy who tried to save her.

Pokemon the Movie XY&Z: Volcanion to Karakuri no Magearna

A mysterious force binds Ash to the Mythical Pokémon Volcanion when it falls from the sky. Volcanion can’t get away, and Ash is dragged along as it continues on its mission. They arrive in a city of cogs and gears, where a corrupt minister has stolen the ultimate invention: the Artificial Pokémon Magearna, created 500 years ago. The minister plans to use Magearna’s mysterious power to take control of the mechanical kingdom. Can Ash and Volcanion work together to rescue Magearna?

Kaze no You ni

Sanpei, a boy beekeeper and the sole survivor of an accident that killed his entire family  meets Chiyo, a girl who gets stung by a bee, and starts a new life in her village. Eventually, Sanpei cultivates the land that the villagers had abandoned, and then disappears. In the land now filled with flowers, Chiyo waits, believing Sanpei will one day return.

Mirai and Rico come to the human world to play, but are separated when the witch Sorciere and her servant Torauuma suddenly appear. Their aim is to acquire the tears of the 44 Precure girls, using them for her “Most Evil Magic.” Only the friendship of all 44 Precure girls will allow them to protect the world.

Soreike! Anpanman Omocha no Hoshi no Nanda to Runda

Runda is a spoiled girl who believes it’s natural for everyone to do things for themselves. She is always with the big, clumsy toy robot Nanda. One day, the “toy stick” that has the power to change things into toys drops into Anpanman’s world. Runda and Nanda hastily go in search of the important item, but are struck by lightning. Nanda ends up being hurled to Anpanman and his friends, while Runda finds herself with Baikinman and his friends. 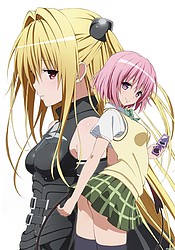 A newly-produced anime short based on “The Day When Naruto Became Hokage” manga episode drawn by the original author Masashi Kishimoto.

It is thirty years after the failure of the Space Colonization Program. Humanity is nearly extinct. A perpetual and deadly Rain falls on the Earth. Men known as “Junkers” plunder goods and artifacts from the ruins of civilization. One such Junker sneaks alone into the most dangerous of all ruins—a “Sarcophagus City.” In the center of this dead city, he discovers a pre-War planetarium. As he enters he is greeted by Hoshino Yumemi, a companion robot. Without a single shred of doubt, she assumes he is the first customer she’s had in 30 years. She attempts to show him the stars at once, but the planetarium projector is broken. Unable to make heads or tails of her conversation, he ends up agreeing to try and repair the projector.

OVAs bundled with fourth and fifth volume of the Ace of Diamond: Ace 2 manga. They will adapt stories from the first act’s 47th volume.

OVA centering on Mavis, who is feeling downcast. The guild members, starting with Natsu and Erza, try to make her feel better.

One Piece: Heart of Gold 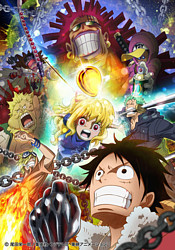 The story will center around a mysterious treasure called “Pure Gold” that even Gild Tesoro desires. The Straw Hat Pirates meet a girl named Orga who knows the treasure’s location, and together they sail to the legendary island Alchemy.

A new year arrives as the school festival ends. The season has come as Kaou-kai members leave their jobs at the Kaou building. Each musical team prepares for the final stage, Graduation Ceremony, to show their thankfulness. After the incident at the school festival, the now-disbanded Team Ootori is disqualified from participating. In the midst of these events, Yuuta Hoshitani and the others make a decision…

Well there you have it, July’s anime movie and OVA selection. From the above OVA’s and movies, is there anything in the above list you would like to see? I can’t wait for Fairy Tail, Natsu vs. Mavis, the manga chapter was hysterical, I am sure the OVA will be too.