Wowie it has been a while since I last put together a manga review. Honestly, I missed this, it has been too long. I have not held back on reading manga, just, finding time to write and to write something half decent has been somewhat of a challenge.

This is the second time that I am reading Ultimate Venus and once again I am left with certain impressions that are hard not feel. This is not a spoiler free review, but not an all-inclusive review either. There is enough spoiler, which will give away quite a bit of the story, although quite a bit of it is guessable and obvious anyway.

When Yuzu’s mother dies she becomes an orphan and is afraid that she will be on her own and is aiming to earn enough money to move back into the apartment that she had been evicted out of, the one she had shared with her mother. Until then she needs to find a place to sleep. Settling on a park for the first night, she is shocked when a guy disturbs her. He claims to be her grandmother’s secretary and that she needs to go with him. What will happen when Yuzu meets the grandmother she has never met before? Will she be able to keep up with her grandmother while not falling in love with the secretary?  Or will she fall short not meeting their standards and does she really want what they are offering?

This was a quick read which was completed in one sitting. It’s not a hard or complicated read by any stretch of the imagination and is quite clearly a harem romance. It followed the pretty basic plot line with a plain (but is actually gorgeous) girl, hot guys falling for the girl as they embark on multiple love triangles while the girl only sees the one guy and that one guy has a tormented past making it so that he can’t be with the girl. Oh yes, did I mention they have met before?

Okay, on a serious note, I am just commenting on a general story pattern here, not bashing it. When I am in the mood, I really enjoy those cliche plot lines and I have now read this manga twice and in two different moods.

I enjoyed the art style throughout the manga. The story’s pacing was decent even if it was a tad predictable. Although, there were some twists and turns that I genuinely did not expect or see coming.

As for the actual characters, I like how they were done. Each added their own dimension to the manga and I love some of them while loathing others. I always love it when I am made to actually care for a fictional person.

Yuzu has a lot to deal with and the way she does handle it all just goes to show that she is a strong character. She grew quite nicely throughout the manga but the ending kind of ruined her growth for me. In the end, all her progress and growth was basically cheapened and just made it seem as if she had been ‘moulded’ rather than have had her own personal growth.

My favourite character: The neighbor

Surprisingly my favourite character is really a minor character who had so few scenes and was really only there to help the plot move from A to B. Yet his concern for Yuzu is genuine and he had no ulterior motives at all. Plus, his facial expressions and reactions were just so cute.

My least liked character: The Grandmother 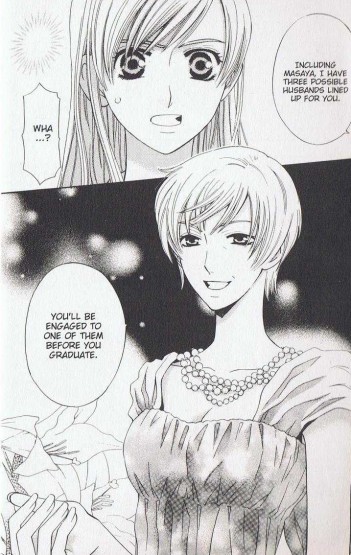 Her selfishness was to the extreme. Her actions and choices I still can not accept. Even though at the end were simply explained away as ‘for her granddaughter’s sake’. She had no contact with her daughter or granddaughter at all until her daughter had died and her granddaughter literally had nowhere else to go. She plotted to set up Yuzu and Kagami right from the very beginning, assuming that it was her place to set up challenges just to make their bond grow stronger. The grandmother went as far as to force Kagami to marry her. Seriously, what the hell. She drove the two of them into a corner again and again and kept hurting both of them. All in the hopes that they would connect and rise above all the trouble and somehow make all of it work. 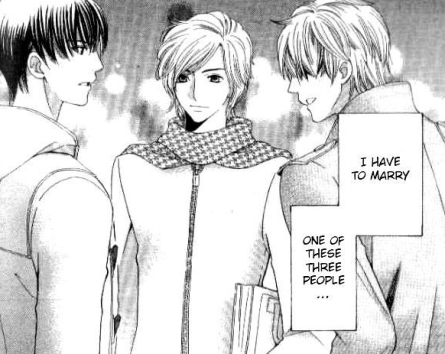 Really, I can not see this as a loving grandmother. In order to break her granddaughter’s connections to the past, she ordered that the remaining things that Yuzu had from the time she lived with her mother, be thrown away. How callous can one be? She ordered it because she felt that Yuzu was too attached to her mother. A mother which had just died not even a month previously. Plus she arranged for three potential marriage partners for the poor girl, but wait, they were never serious partners, no, they were just there to create a trial for the duo to overcome and strengthen their bonds with one another. Once again, how cruel? Not just for the duo, but the ‘fiance’s’ and their families who got caught up in it just to be fodder for someone else’s scheme. Yet, as mentioned previously, Kagami was always the intended partner, so really there had been four candidates for the arranged marriage. Thus, with Yuzu arguing the arranged fiance’s and then it all being okay because her grandmother had been scheming to set her up with the one she loves. That is just not okay.

In the end, all is not only forgiven but entirely forgotten as they embark on their happy ending, with Yuzu showing concern for her grandmother’s health letting her know she is not alone.

I don’t get it. It baffles me to no end. The end left a lot to the imagination as a lot of things were left unresolved. It was short and sweet, and I did enjoy some of the over the top antics. It is perfect for that cliche fix that is craved every now and then. Yet, on the whole, it left much to be desired.

Would I recommend it? Uhmm, very selectively but on the whole, not really, since there are a lot of other great reverse harems to read. Have you ever read Ultimate Venus?

2 thoughts on “Ultimate Venus, nothing but betrayal and schemes?”