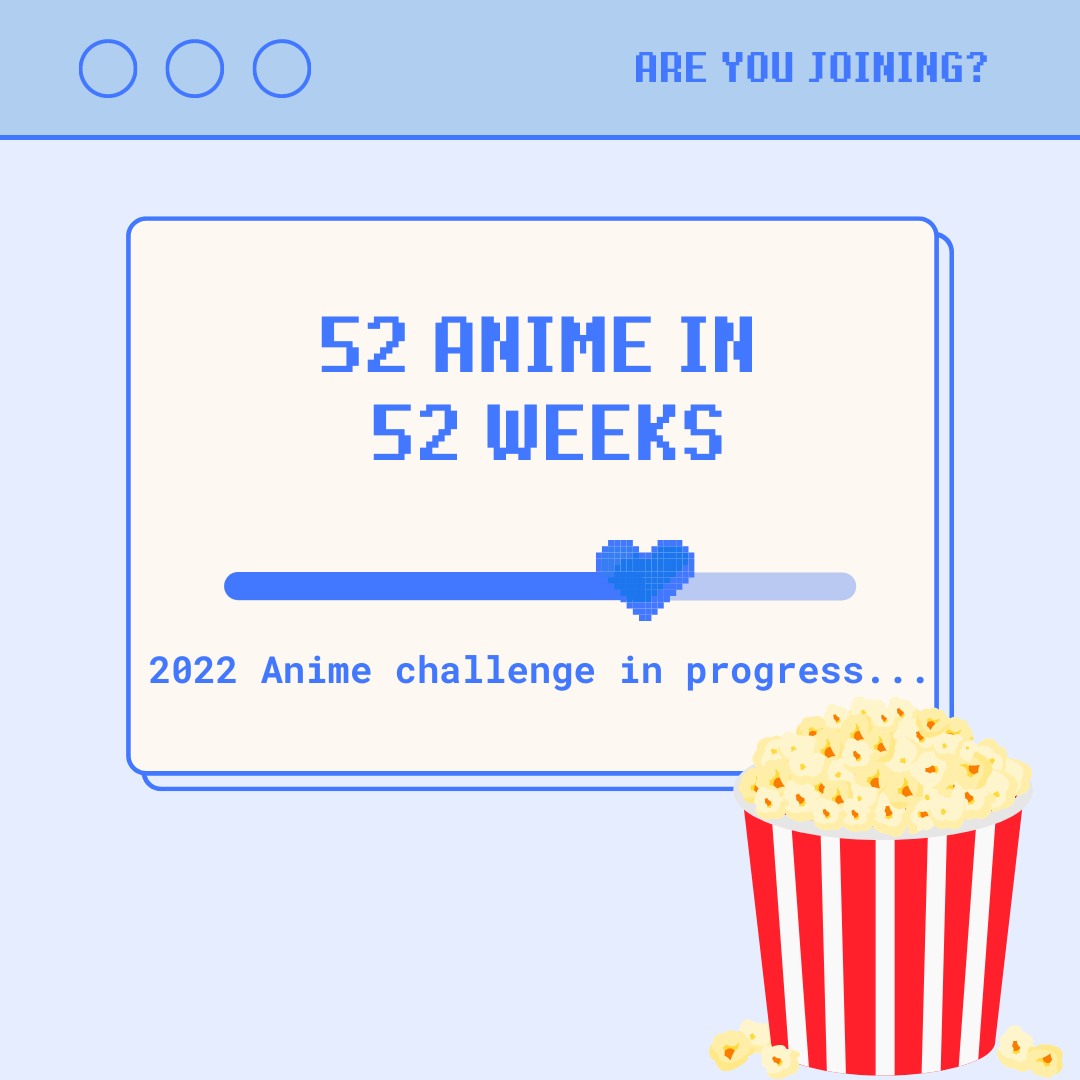 I am late in posting my progress report for the anime challenge I set for myself for the year 2022, however, I do have a Google document where I log all my thoughts for each anime as I watch them. Thankfully I can pull that up to compose these posts. I have not had the chance until now to put all of this together. I shall be posting September soon as well and I am busy compiling October and November.

My anime challenge is to watch one entire anime per week for each week of the year. An entire anime means, every season, every movie and every OVA associated with that anime. Some have proven easier, and some have proven challenging. The challenging ones are why this has taken so long to get out and the easy ones have somewhat proven difficult to write about.

I challenged others to join me on this journey and I appreciate those who have. You are amazing and I love following your progress. It honestly does not matter if you have watched the anime before or if you have never seen an episode. The only thing that matters is one anime per week from start to finish. I myself am selecting anime that has been sitting on my to-watch list to help me narrow that down.

As such, August is a collection of anime that has been on my list for years and ones I recently discovered for future blog posts. For me, the week starts on Wednesday and ends on Tuesday. Here is how August, weeks 31 to 34, of my 52-week challenge, went for me.

Clannad was a difficult anime for me to watch. All the way through, I could not warm up to Nagisa. Tomoya’s making the Dango family for Nagisa is so pure and precious. The ending frustrated me. They went for both the sad and the happy endings without clearly making them make sense. Nagisa’s choices frustrated me to no end. I adored Tomoya and his efforts for the one he loves. For its age, the anime has done well, and I can see why it is a beloved romance; however, for me, this one missed the mark, and I did not really enjoy it. The anime was a chore to watch and I personally took many screenshots during my watch-through so that I would not have to watch it again.

For week 32 of my 52 anime in 52 weeks anime challenge I took on Brothers Conflict. I figured it would be two birds with one stone. The way that the Brothers Conflict anime starts is incredibly stupid. However, I had planned to watch this as my challenge anime for the week, so I stuck with it. That gene is brutal; I adore him. It turns out the first episode I watched was not the first episode. Oops.

Thirteen sudden brothers are insane. I genuinely feel sorry for their mother. The squirrel was a rather annoying character. Everything happens so quickly and suddenly that it feels like I am going to get whiplash. It seems each episode is kind of focused on ‘set pairings’ but they are not. I felt better knowing that not all 13 were her biological children. All-round rejection was a surprise ending for me, but the ending came way too quickly. There were too many personalities, possibilities, and stories to tell in just 12 episodes. Honestly, a typical rushed reverse harem and I would probably have enjoyed this if we had more time to get to know the characters and actually bond or connect with them. Instead, whiplash.

Babylon is so messed up. The concept of the “right to death” is incredibly interesting. Letting suicide be legal is a morally heavy topic that I am both for and against. The anime does cover my reasoning for being for it, euthanasia. However, suicide for organ donation does make me question a lot and I am not for this being a reason for suicide. I watched Babylon for my 33rd anime and I was not a fan of how it ended. Glad I watched it, but I probably won’t watch it again. I had higher expectations and was somewhat let down by the final execution.

RIN: Daughters of Mnemosyne was such a ride. For week 34 of the challenge I thought I was in for an easy anime with only six episodes. OH, MY WORD. What did I watch, and when can I watch it again? I have to watch it a second time to make sense of it all – see if I missed anything the first time because this jumps all over the place and expects you to keep up, and those jumps are not smooth. I was confused while watching this, but I completely enjoyed watching it. The number of sex scenes and boob shots was not necessary, and I will probably skip through them in my rewatch. This is one of those anime that is violent and brutal and has a cluster of ‘what did I just watch’ moments. I adored the characters; I just wish we could have gotten to know a few of them better.

Musings on the 52 anime in 52 weeks anime challenge:

August was a good month for a mix of anime making me question what I just watched. It was also a month of rushed anime and anime with questionable execution. I enjoyed my selection this month. I am also glad that I had not fallen behind on the challenge once again as I had in previous months.

My favourite watch of the month was definitely RIN: Daughters of Mnemosyne. Are you joining me in my 52 anime 52 weeks challenge? How is it going for you? I am following the #52anime52 tag on Facebook, Twitter, TikTok, Instagram, Pinterest and Gettr, if you would like to share your journey with me and others.