Otherwise I am happy to say Happy World Otaku to my fellow anime and manga obsessed fanatics!

I know not all like acknowledging that they are an otaku and then you get some who just are really awkward with the word otaku and I don’t blame them since in Japan being an otaku is a negative thing as depicted in many anime and manga alike. Then on the other side of the spectrum you get those who proudly boast that they spend hours holed up in a room watching anime and reading manga.

Am I an Otaku? I am self declared although I mainly say that I am, since I lack a better word for it. Shockingly enough my world does not revolve around anime and I can still have conversations with people that does not involve any aspect of the ‘otaku world’. Perhaps Enthusiast would be a better word as I really do enjoy anime and the culture around it (obviously, otherwise All About Anime would never have begun.)

Either way, I really do enjoy the ‘World Otaku Day’ concept. I will be participating in it whole heartedly. Since today also happens to be my last day at work I will be finishing early which means I will have more time to indulge.

I plan to watch:

The numbers in brackets are the number of episodes. So going by the above list I shall be spending 16 hours watching anime. That is doable, who needs sleep? I also plan to read a couple chapters of various manga. Plus I also will also read any new chapter releases that happen to come out like I do on a daily basis any way.

I made my ‘otaku’ mark (^w^) on my wrist like we are supposed to do today to help us recognise one another. 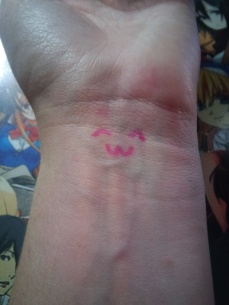 Overall this day is really fun and the conversations are fascinating! Will you be joining in and celebrating World Otaku Day? If yes I would love to see your ‘otaku’ mark! Take a snap and post it on Social media and tag me @AllAnimeMag!

So how do you feel about World Otaku Day?