Wow-what a read. Zankoku na Kami ga Shihai suru really drew me in, more so than I could have ever imagined when I started it. 86 chapters that I just had to read. All throughout forced to confront the complexities of the human mind and relationships. When I described the story to my bf he stopped me partway telling me he did not want to hear any more about it; all because he thought of it as disturbing. He even questioned the mind of the mangaka who wrote it. I devoted myself to this for three days, I just had to finish it.  Warning this is a long and heavy review. You might wanna get comfy. 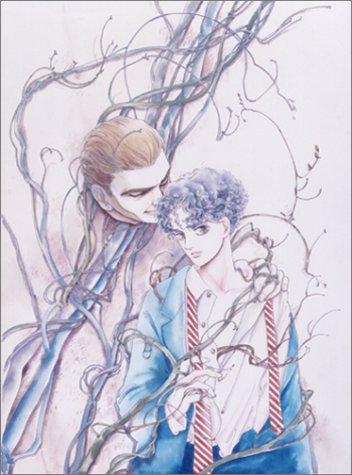 Jeremy in order to help keep Sandra, his mother, happy and mentally stable accepted a onetime deal. Or at least it was meant to be only one time. Jeremy agrees to his soon to be step father’s demands and is sexually abused all to save the happiness of his mother. Thinking he can escape and keep his mother happy he eagerly escapes to his new boarding school with his older stepbrother Ian. Realizing he is unable to escape Greg, his stepfather, he desperately devises a plan to save himself. Only things do not go according to plan. When Ian suspects Jeremy of foul play and pressures him to confess, will Jeremy repeat his sin? Or will he be taken and broken even more? Unable to ever escape Greg or confess to Sandra, how can Jeremy keep it together while seducing Ian and using him?

This started in the middle of the story with the funeral of the mother and the father in critical condition. At the funeral stood two boys, one of them muttering that his plan had gone wrong, and the other realizing that his brother is a murderer. Yes really. If you could not tell from the info above, this is a really graphic and consuming tragedy of a story.

Like normal I dived straight in ignoring the blurb that clearly tells you what it is about, I am so glad that I did. This manga really took me by surprise and had many twists and turns that I honestly did not expect. The violence in this was depicted brutally where you could understand what Jeremy was going through. Still, the worst part for me is that as the story progresses you can clearly watch how Jeremy’s mental state unravels and how he is slowly being broken. I liked the art for this and the way they depicted Jeremy’s internal struggle. The way that his conflictions, pain and confusion was illustrated beautifully. The mangaka must have done quite a fair amount of research for this. I was really drawn in, almost obsessed. I had to know, did Jeremy manage to find a way to carry on after everything that happened to him? Did Ian realise how he truly felt, did we ever learn the truth of his feelings? How would their relationship end? Could they have a mostly normal relationship? Would Jeremy ever confess all that had been done to him by Greg? Would Ian snap and succumb to the ghost of Greg’s will?

The switching narratives of the manga really drew me in and intrigued me as it showed the insights of both Ian and Jeremy. I was fascinated at the ups and downs in Jeremy’s psyche and at the way that even Ian had been dragged in and that both of them were lost and both of them needed help.

I am so glad I discovered this once it had already been completed. I don’t know if I could have handled the 10 years it took to write this. Waiting for the next chapter would have been daunting. The characterisation was full and mind-boggling. Each character was distinct and easily recognisable with their own unique characteristics and personality. The story was well thought out and paced really well. For me, this manga stood above the rest and has instantly become a favourite.

Now for the spoilers to start…

At the beginning of this and through quite a bit of this it was scary at how much I could relate. No, I have not been bound and beaten or raped.

There is a frailty and certain strength when someone is pushed to their breaking point. When it no longer matters what the consequences might be, you just need to get out and be free without exposing yourself or giving in. The only thing that matters is that no one knows your secret. That no one finds out because then they will know you are not whole. They will know that you are broken. Often not wanting those around you to know because their opinion of you will change and thus then there really will be no going back. That will be the official end and full confirmation of the truth you spent so long hiding and with such difficulty and care burying deep within you. Always scared the other party will slip up and reveal the truth. For the secret to remain secret you will do what needs to be done. Slowly becoming numb to the world but so overly aware of your own sins and pain. The darkness that consumes and drags you down with a single haunting face. Knowing that breaking the ‘ghost’ is the only way out. In Jeremy’s case, he saw killing Greg as his only way out. By killing Greg the truth would remain hidden and he would be free.

Jeremy reached out and contacted social services, who then explained that they would approach his parents which scared him. Under no circumstances was Sandra to know what he and Greg did. He did not want to shatter his mother’s happiness. He then finally reached out to a psychologist who tried his best to help him. Going so far as to ‘help’ Jeremy plan to kill Greg. On his death bed, the psychologist told Jeremy that the best thing to do would be to confess. Which Jeremy refused to do so. That would be putting his mother at risk.

Then after a series of incidents, Jeremy finally did it. He snapped. He could take it no more, went down to the car and tampered with the breaks. This is where the story gets tricky. You do not know if his tampering was the cause of the accident or if it was really an accident that was amplified by his tampering. The car slid on the road, rolled over the edge of a hill and caught fire. This resulted in the death of both Greg and Sandra. Briefly happy at the news that there was an accident to shocked and broken to learning that his mother had died too.  Jeremy accepted that as his punishment. Even when Greg finally died, it was tainted by the fact that his mother was dead now too.

However, even though his mother had also died, Ian was suspicious and knew instinctively that Jeremy killed their parents, he pressured Jeremy for a confession. Stressed, distraught, confused and more Jeremy was pushed into a corner. He decided to kill Ian too. Even though before you could see there was some form of connection between the two. Jeremy hesitated and debated on whether he should or not, but he decided to do it anyway devising a plan. Such brotherly love, one full of hatred the other hurting and scared. While searching for his mother’s sleeping pills he stumbles upon his mother’s diary. After reading it he realises that she had known and that she had done nothing. She had sacrificed him to Greg so that she could keep her happiness.

His shock and devastation led to him confessing to Ian that he was Greg’s lover. Shortly afterwards Ian saves Jeremy from drowning. Yea I found this ironic, the guy you wanted to kill is now saving your life, which you had given up on. In order to escape Jeremy runs away to Boston where he becomes a prostitute and starts on drugs. Meanwhile, Ian desperately looks for ‘proof’ of what Jeremy has said only to find nothing. He then spins Jeremy’s truth and makes it suit his image of his father. Only to stumble upon a hidden compartment after Jeremy had left. In the compartment is everything that proved Jeremy’s story.

With the image of his father shattered and his world thrown upside down Ian goes and hunts down Jeremy in Boston. The codependency that is developed by these two was interesting. One wavering between love and hate the other indifference and need.

Watching the progress between the brothers was gripping. The backwards and forwards. The way they would occasionally move forwards and then suddenly fall apart and then build up their relationship again.  Watching all their mistakes right from the time where Ian pays Jeremy for sex. Seeing how Ian wants Jeremy to get better and start over. Musing over the reasons Jeremy fights and then caves, wondering how does he get away with so much manipulation?

The ending for me, I had been conflicted. The way that you don’t get a solid answer or perfect clarity on Jeremy’s ‘recovery’ was rough. To go through the whole story to have it end that way at first felt half-hearted. Then I looked again and realised it was a really strong ending. Jeremy will never be whole, he will never be ‘cured’. He will battle with it for the rest of his life. There will be good times where he forgets and then there will be the dark days where everything is all too clear. So to depict him as perfectly happy would have smeared the story and have turned it into a joke.  With the end, you can see Jeremy is moving on with his life and slowly picking up the pieces and coming to terms with the way things are. He has picked himself up and is willing to move forward as best he can. We also get to see a snippet of the lives of the other characters. Nadia is pregnant. Ian has a girlfriend but still longs for Jeremy. Which makes me wonder what will become of his longing? What will he do with his feelings? This has been left up to me as the reader.

I think what really got to me was the realism. This takes on the harsh reality of rape, abuse, emotional blackmail and so much more without sugar-coating it. It does not make it seem okay. It does not show the characters magically becoming happy and perfectly sound. It is hard and brutal. It shows a long and harsh battle coming to terms with reality and moving forward.

Thanks for reading all the way! I would honestly love to know your thoughts in the comments below.

P.s. There is so much to the story I have not mentioned, it is worth the read.