Ah once again I am forced to pick a single favourite, and once again I shall be avoiding the main stream because then I’ll start listing way too many fav females like Erza, Rukia and Yorichi.So who is my favourite female character if I ignore all of the popular anime women?
None other than Rosette Christopher from Chrno Crusade! 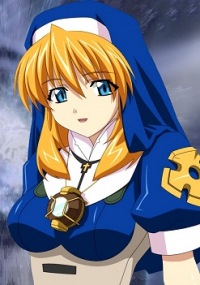 She may be clumsy and loud and at times clueless but she is determined and no matter how bad a situation gets she never gives up. Her tenacity and ability to never lose hope has always stayed with me no matter how many anime I have watched. Even though she has spent so many years desperate to find her brother with very few clues and dead end after dead end she is still hopeful that they will one day be reunited.

Although she is a mere human she is able to take down incredibly strong demons, which often leads to usually amusing and unfortunate consequences. She was raised by the church after she was separated from her brother. Since then she has trained and now works with the church to preform exorcisms and help innocent people. She manages to connect with people even though she has a short fuse.

I like the fact that she has little grace and is far from delicate when she sleeps. Although I must admit, her driving really does scare me. If you don’t know her I advise you watch Chrno Crusade and get the tissues ready! I am seriously jealous over the way she just doesn’t give up and the way she will jump right in. Rosette is also fiercely loyal and will go to the end of the world to protect them, she is also willing to give up her own life for them.

Overall no matter what I just can’t forget her or her struggles. She quickly became a favourite character and has remained that way since 2008!

Sorry for this post being late! I got a bit distracted by the New Anime post for September and real life caught up to me. I’ll try do better in the upcoming weeks.

Thus ends the fourth post for the challenge. Who is your favourite female anime character? Let me know in the comments below! To know more about the challenge click here.